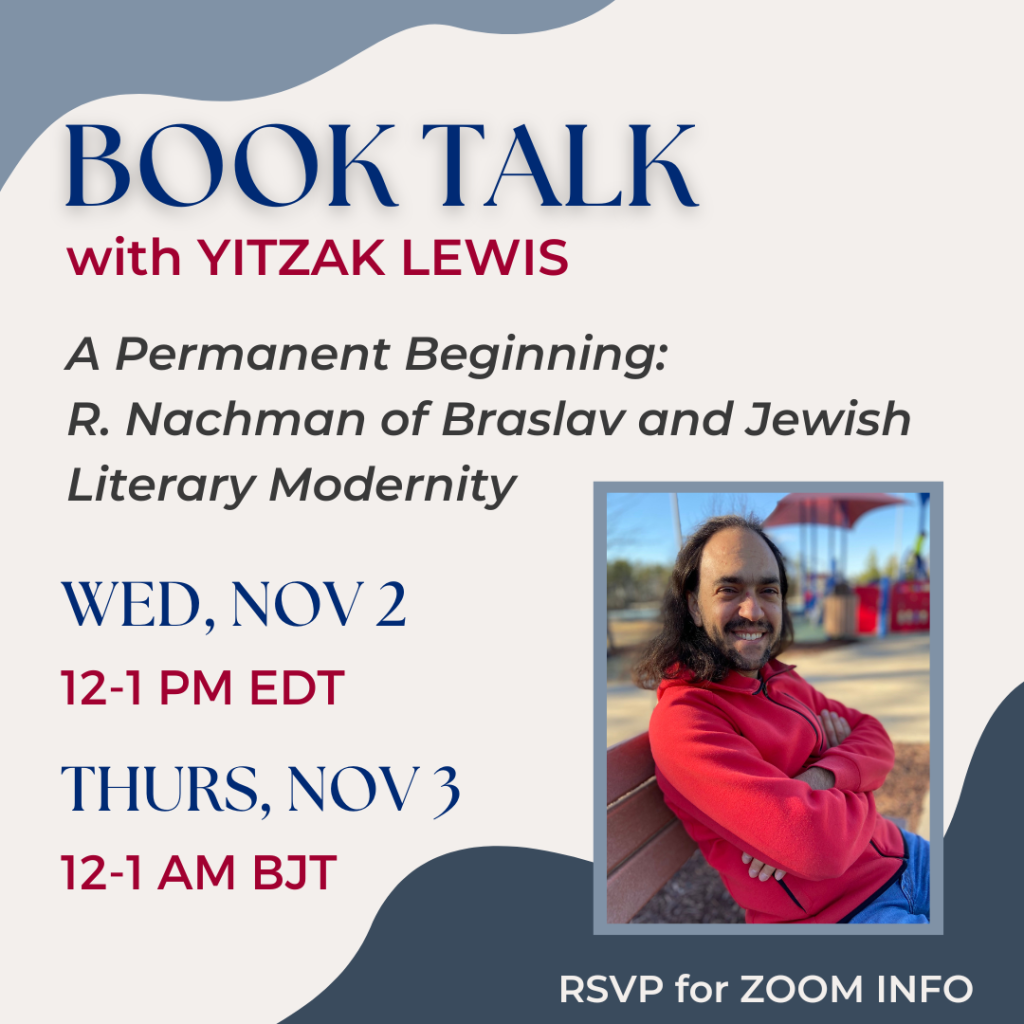 Yitzhak Lewis, Assistant Professor of Humanities at Duke Kunshan University recently published A Permanent Beginning: R. Nachman of Braslav and Jewish Literary Modernity. Please join us on his book talk at the Institute of Israel and Jewish Studies at Columbia University.

The Hasidic leader R. Nachman of Braslav (1772–1810) has held a place in the Jewish popular imagination for more than two centuries. Some see him as the (self-proclaimed) Messiah, others as the forerunner of modern Jewish literature. Existing studies struggle between these dueling readings, largely ignoring questions of aesthetics and politics in his work. A Permanent Beginning lays out a new paradigm for understanding R. Nachman’s thought and writing, and with them, the beginnings of Jewish literary modernity. Yitzhak Lewis examines the connections between imperial modernization processes in Eastern Europe at the turn of the eighteenth century and the emergence of “modern literature” in the storytelling of R. Nachman. Reading his tales and teachings alongside the social, legal, and intellectual history of the time, the book’s guiding question is literary: How does R. Nachman represent this changing environment in his writing? Lewis paints a nuanced and fascinating portrait of a literary thinker and creative genius at the very moment his world was evolving unrecognizably. He argues compellingly that R. Nachman’s narrative response to his changing world was a major point of departure for Jewish literary modernity.

Interview about this book.

Yitzhak Lewis is Assistant Professor of Humanities at Duke Kunshan University. His research interests include comparative literature in Hebrew, Spanish and Yiddish, literary and cultural theory, transnational writing and world literature. He is author of A Permanent Beginning: R. Nachman of Braslav and Jewish Literary Modernity (SUNY Press, 2020). His current book project, tentatively titled Games of Inheritance: Kabbalah, Tradition and Authorship in the Writing of Jorge Luis Borges, explores the central role of Jewish literary and intellectual traditions in the writings of Argentine author and public intellectual Jorge Luis Borges (1899–1986). He has recently edited a volume on “Yiddish and the Transnational in Latin America” for In Geveb: A Journal of Yiddish Studies (2021) and is currently editing a collection titled 100 Years of Jewish Literature in China about the reception history of Jewish literature in China from World War I until today. His work has been published in Variaciones Borges, In Geveb: A Journal of Yiddish Studies, Theoretical Studies in Literature and Art, and is forthcoming in Journal of Latin American Jewish Studies.