Faculty Panel 1B: Literary and Virtual Reality
By Waner Shao 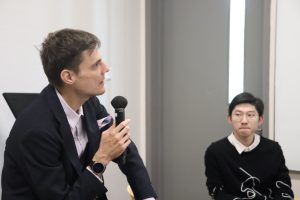 Few people have thought that there is a relation between detective fiction and Zen Buddhism. This research examined this relationship through the work of the Dutch writer Janwillem van de Wetering. Before he became famous as a detective writer, he also deeply explored Zen Buddhism. He drew his inspiration for detective fiction through Buddhism. This relation is considered important, and this research hypothesized that popular literature could immensely influence people’s impression of Buddhism.

The research found out that his detective novel is within the framework of emptiness, a Buddhist concept rooted in Mahayana doctrine. The Mahayana thinkers claimed that things do not have the essence and are only emptiness. The symbol for emptiness in the author’s work is “Joshu’s Mu,” the most important koan in the Japanese Linji monastic curriculum. This koan appears regularly in his detective fiction. Additionally, the concept of emptiness is reflected in several conversations of commissaries, another character, with his colleagues.

Moreover, researchers argued that emptiness is more than a conversational topic in Van de Wetering’s fiction. In these novels, justice is not brought. Rather the policemen are making philosophical tales endlessly. Consequently, the choice of the detective genre is another mask of emptiness that gave the author to explore a novel of emptiness without sacrificing his sale.

In conclusion, Van de Wetering’s characters allude to Zen’s ideas, as enunciated in the koan of the tradition. In focusing on Zen’s ideas rather than its religious practice, he reinforced the aesthetic impression of Zen.

Professor Nellie Chu‘s presentation, From the Runway to the Platform (and Back): The Politics of In-Authenticity in an Era of Global Fast Fashion and China’s E-Vendor Economy, described the e-vendor economy model in Guangzhou from her recent work. Her research demonstrated that although the platform economy and vendor economy may seem different, they are actually “two sides of the same coin.” The global supply chain for fast fashion in southern China demonstrates the “craft-like” mass manufacturing model, which has in fact combined a fragmented, second-hand machine jiagongchang – a kind of cottage industry – with a global industrial chain.

Professor Andrew Field chose his familiar Jazz Communities in Shanghai, 1920s-2020s as the theme for his presentation. In fact, he has taught several history elective courses on similar topics. He demonstrated how Jazz was accepted, absorbed and integrated as a new and foreign musical form in Shanghai over a period of 100 years. His presentation incorporates content from his two books, Shanghai’s Dancing World and Shanghai Nightscape, as well as research from recent years; specifically highlighting how the Jazz community in Shanghai has changed and been influenced in the context of COVID.

Finally, Professor Megan Rogers brought her observations and reflections on the relationship between gender and religious conversion in China in her panel Social Risk and Religious Identity Formation in a Non-Religious Environment: Gender and Religious Conversion among China’s Urban Professionals. She brought to light a commonly acknowledged sociological conclusion that “women tend to be more religious than men.” Her research demonstrates that this conclusion holds true despite the fact that China has a peculiar, mostly non-religious environment in which the government promotes atheism. Women in China also take special risks, such as the higher level of social risk they must navigate in their private lives.

This panel focused on politics and environmental concerns. Three professors gave their entertaining and professional research presentation about how representation of black people is changed by election reforms, how green space relates to wealth and gender in pop culture and how capitalism can influence the climate in US West. 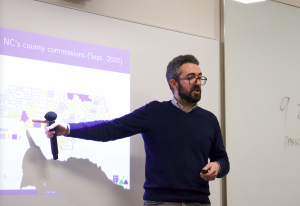 Whether black people are well represented in institutions raises many people’s concern. This research is about the descriptive representation of the Black people in North Carolina in local government at the county level. The research aims to discover whether the institutional reform can increase black descriptive representation from multimember at-large to geographically defined ward elections. Also, it adopts a new measure of descriptive representation, which is seats above expectation (SAE). The seat share in bodies is decided by the population share of black people in that county. However, the approximation is not always accurate, especially when the body is small. For example, the population share is 9%, but the body only has five people. This means the seat share can only be 0% or 20%. Consequently, when the election converses from at-large toward, the representation level may change because of this difference in approximation. The research calculates the Black SAE across North Carolina’s county commissions and finds that shifting from at-large to ward-based elections could yield an additional Black commissioner on every third commission, increasing Black commissioners statewide by 20. 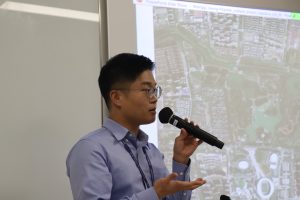 This talk is based on Prof. Wanggi Jaung’s brilliant under-going research connecting popular culture and the intensely emerging challenge of environmental injustice between classes and genders with sophisticated research methods of machine learning.

In this talk, Prof. Jaung shed light on the potential correlation between scenes in the Korean movie Parasite (2019) and the audience’s perception of environmental inequality. He began his talk by mentioning the existing environmental injustice: On one hand, he talked about the benefits including biodiversity conservation, mental & physical health, and art inspiration that lies in urban green spaces; on the other hand, discussed the disproportionate distribution of urban green spaces and how accessibility of these spaces play a role in the existing environmental injustice.

Popular culture, including movies, popular music, and popular literature, interacts with massive audiences and has a large impact on our society. They are capable of reflecting on many social issues, including environmental issues. Several movies, including Avatar (2009) and the Day after Tomorrow (2004) have both shown their concerns on the relationship between human and nature. However, Prof. Jaung mentioned that there is little evidence on environmental injustice in popular culture, resulting in limited socio-cultural understandings of class-related environmental injustice. Therefore, Prof. Jaung set up his case study based on Parasite (2019) to bridge the gap between the two.

The movie focuses on the gap between the poor and rich in contemporary societies, and reflects several existing injustices among different social classes, focusing on their environments. Prof. Jaung showed the trailer of the movie and provided the audience with a general grasp of what this movie is about. After that, he introduced his research questions concerning whether classes and genders are associated differently with environmental resources, hereafter represented by urban green space in the movie. He pointed out the scenes in the movie that indicated  green space was tightly connected with a specific class to illustrate such difference.

Then, he introduced the machine learning method in this research: With data he collected that includes thousands of images in the movie, he has trained machines to identify whether a scene was about a “non-green scene” or “green-scene” and whether it consists of a male face, female face or neither. Based on the highly accurate machine data, he obtained results showing unequal green space’s link with both class and gender. Astonishingly, there was even not a single green scene for the poor class!

Based on his results, Prof. Jaung argued that such kind of movies may mislead the public’s perception of urban green spaces as a sign of wealth, potentially resulting in their accepting of the environmental inequity. Besides, the by-gender difference indicates that traditional gender roles influence green space’s relations between women and men.

In the Q & A section of the talk, the audience raised questions, some commented that this research was more quantitative than qualitative, resulting in its lack of persuasiveness. Prof. Jaung admittedly responded that the outcome did not consider much of public spaces (also not shown in the movie), but rather it was concerned with private ones. As an undergoing research, he will go deeper into this topic.

In his talk, Prof. Giacomelli introduced his integrated study on the historical debate of whether land resources should be used for agriculture or for the livestock industry back in the late 1800s American West. While agriculturists argued that their work was beneficial for the climate, the ranchers claimed that their production was even more beneficial.

During that period, the environment of the US West was very different than what was widely shown in the cowboy literature and movies, Prof. Giacomelli mentioned. The primary stage of capitalism made the representative scenario of the district very much related to the mass production progress, including the trains and cattle involved in product transportation. In this period, people prioritized economical development; they also believed that cutting down forests for the well-being of capitalist economy benefited the climate.

Based on its historical background, this particular debate involved a lot of political concerns. To further explain, he introduced several first-hand sources supporting either side of the debate. In that period, transforming the “virgin lands” into “agriculture utopia” was claimed by the agricultural supporters, who believed their farming methods to be climate-friendly. With agriculture,  Prof. Giacomelli cited from Dana Wilber’s 1881 book, The Great Valleys and Plains, that “man can persuade the heavens to yield their treasures of dew and rain.” And of course, as Prof. Giacomelli mentioned, they claimed their competitors, the ranchers, to be disastrous for the climate. They even raised conflicts with them.

In the meantime, the ranching industry practitioners and their supporters held a contrary belief. A supporting source, Bent’s book, Meteorology of the Mountains and Plains, of the ranching industry cited by Prof. Giacomelli states: “these lands, as they stand, and will forever stand, are not fit for agricultural cultivation … at the same time preserve under control for the use of cattle growers and the beef makers.” Indeed, mentioning climate in different ways was no more than a means to emphasize the legitimacy of each industry’s interest. That was why most research concerning the same topic did not attempt to go further to integrate political economy.

At the end of his talk, Prof. Giacomelli highlighted the parallels between historical and contemporary climate policy. In the recent years, people does prioritize  climate concerns over economic growth – this was completely contrary back in late 1800s American West.