On Saturday, November 13th, the student seminar hosted by Professor Jianbao Wang was held in the innovation building 1051, from 13:00 to 14:30 pm. The topic was “Entrepreneurship and Confucian Ethics.” 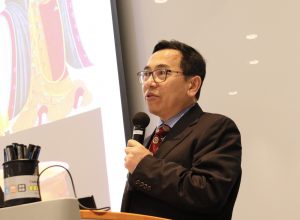 Professor Jianbao Wang is the Director of the Center for the Humanities and Business Ethics at Cheung Kong Graduate School of Business. His research focuses on Confucianism as well as developing new business models. His publications are published in renowned journals and other outlets including ChinaNews, Chuanshan Journal and People’s Daily. Before pursuing his doctoral degree in Philosophy at Peking University, Professor Wang had rich experiences in practicing entrepreneurship, from corporate group management to representing Pakistan Railway.

To begin the presentation, Professor Wang first shared the way social occupations are divided in Ancient China. They are categorized into four types: shi (educated class, those who were very likely to enter bureaucracy after passing examinations), nong (farmers), gong (workers) and shang (businessmen). While those four categories function differently in the maintenance and progress of society and have differentiated statuses in practice, he asks the audience – what is their shared similarity according to the Confucian perspective?

After some interaction with the students, Professor Wang provided his own account – what the Confucians highlight is that, no matter which specific jobs people take and positions they work for, they are “concrete living people” here and now, and to the future. The emphasis on the values of human beings, Professor Wang implied, is one of the core values of the Confucian value system.

Then, the Professor Wang pointed to the unique features of Chinese culture and Confucian spirits. He first made a comparison with other cultural groups – there are some, he argued, that actually rely heavily on the power outside of our own community, such as the will of gods in Indian traditions; there are also some who rely heavily on the power inside of our own community and probably inherently within ourselves, such as the Ancient Hellenic traditions of reasoning.

However, Chinese culture seems to be a special one, distinct from the two types above. Instead of inclining completely to either heaven or human beings, Chinese culture, particularly Confucianism, suggests that secular affairs and heaven are actually inseparable and integrated with each other. While the will of heaven contains moral and metaphysical objectivity, which deserves the truth, we can also sense its existence and attain it through self-cultivation in our common society. Therefore, instead of being a dualism notion separating nature and human beings to different sides, in Chinese culture and Confucian insights, they are actually a utility of these two. The unity of heaven and humans, Professor Wang suggested, is one of the most charming and inspiring characters in Confucianism, and many of its insights can still serve as a strong reference to our present situations.

Professor Wang further shared the value system in Confucian framework of moral philosophy. He argued that shan (being kind and benevolent) is one of core values in the Confucian moral system. It can have important implications in our contemporary scenarios, including entrepreneurship, Professsor Wang’s specialized field. For instance, many entrepreneurs have a difficult time in moderating their relationships with various stakeholders and workers. In this situation, the greatness of being shan is indicated, as it cannot only make us a more considerate person, but the effect on others can also promote mutual understanding and problem-solving.

Being shan means that we should not simply limit our perspectives to our own interests but to also be concerned with the interests of others and bear social responsibility firmly in our minds. This applies to entrepreneurs as well. The faith in shan, Professor Wang suggested, demands no precondition or rationality; it is rather a belief and calls for our participation in an intuitive way. We cannot put a price tag on being an ethical and moral person, as this act itself is immoral.

Besides these issues, Professor Wang also shared related history and studies in Confucianism, from the development of Neo-Confucianism in Song dynasty to the 21st century Confucian scholars we are now part of. He also conducted an in-depth exploration about the prominent figures in Confucian intellectual history, such as Zongsan Mou and his comparative study in Confucianism, Buddhism and Taoism.

The seminar continued with a Q&A  session, where participants brought questions from different angles to discuss, and Professor Wang patiently addressed them one by one. Professor Wang ended the session with an exchange of ideas and thought-provoking remarks, leaving the participants, including myself, feeling fulfilled with insightful knowledge!