Keping WU, Associate Professor of Anthropology is scheduled to give a seminar in May (see below). Please email jl1093@duke.edu if you want to get the Zoom link.

Title: The Powerful Other: Strategies of Ethnic and Religious Pluralism in Southwest China

Northwest Yunnan is nested in the border areas of Tibet, Myanmar and Southwest China. The religiously and ethnically diverse region has been astonishingly lack of “conflict,” as what is often assumed in regions of ethnic and religious differences. This paper argues that there is an organic form of pluralism through frequent inter-ethnic and inter-religious marriages, multi-lingual daily interactions and strategic ethnicity registrations. Ethnic and religious boundaries are made permanently or temporarily permeable through celebration of boundary-crossing rituals such as weddings and funerals and other shared experience such as collective labor and migrant work. Furthermore, analysis of its ideas of the spirits reveal that this region has a strong tradition that associates “the other” with power and creativity, instead of inferiority or the need to be subdued. This sacred and secular understanding of power thus enables the people to use kinship, rituals and other shared experiences to foster group-formation that is fluid, porous and malleable, instilling empathy and obligation as the basis of this pluralistic borderland society. 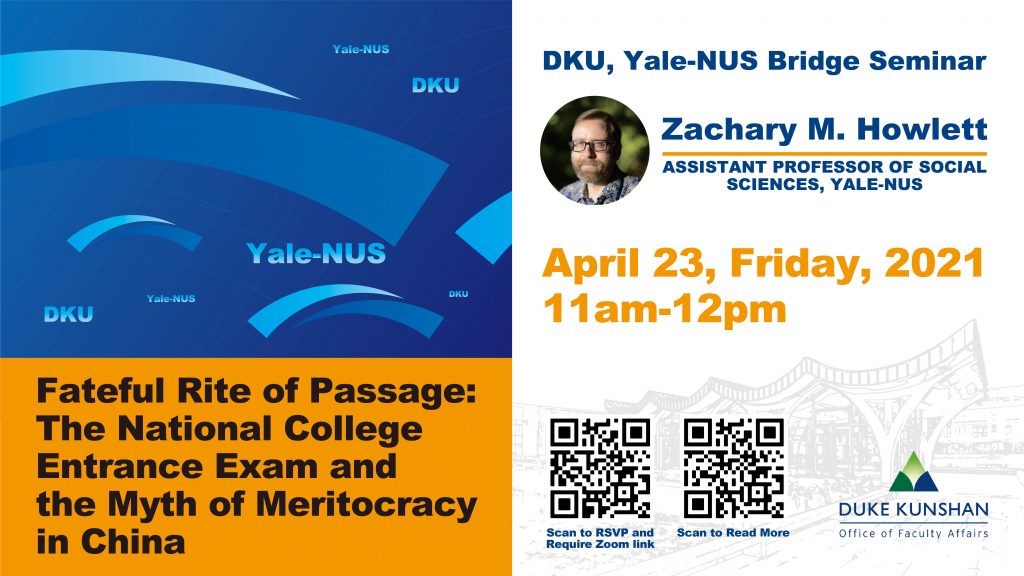 Xin ZHANG, Assistant Professor of Chinese Language and Intercultural Communication is scheduled to give a seminar in March (see below). Please email fx28@duke.edu if you want to get the Zoom link.

Title: Negotiating a Multilingual Self through Chinese as a Second Language: Foreign Professionals in Modern Chinese Workplace

Being able to function in a Chinese workplace is what many learners of Chinese as a Second Language (CSL) report as their long-term motivation and the ultimate goal of learning Chinese language and culture. Yet few empirical studies have investigated CSL learners at the most sophisticated level to understand what leads to and constitutes their multilingual experience and identity co-construction as a foreign professional in modern Chinese workplace. The project examines foreign professionals (including academians) with advanced Chinese skills working in a multilingual environment in China where being able to use Mandarin is integral to the subjects’ professional standing and performance. Engaging the current debate over a “multilingual/multicultural turn” in fields concerning language learning and development as well as intercultural engagement, this project adopts, and contributes to the theorization of, Third-Space personae as a key analytical notion in understanding the negotiated and co-constructed nature of selfhood/identity in multilingual and intercultural interactions.

This paper focuses on the ways race and native-speakerness as well as their ideological manifestation in a Chinese context interfere with selfhood/identity negotiation of heritage and non-heritage (white) CSL speakers. We examine if and how Third-Space personae mediate the racialized expectations of these foreign professionals in multilingual Chinese workplaces.

Horvath Gergely, Assistant Professor of Economics is scheduled to give a seminar to introduce his research concept (see below). Please email fx28@duke.edu if you want to get the Zoom link.

陈霜叶Shuangye Chen (professor and associate director of the Institute of Curriculum and Instruction at East China Normal University) and 段颖Ying Duan (Associate professor of Anthropology, Sun Yat-sen University. 世界海外华人研究学会ISSCO International Society for the Studies of Chinese Overseas: Director of China Office) will offer an experience sharing session on November.