Skip to content
That’s when it occurred to me that all interpretation of scripture is intrinsically improvisational. We ingest scripture and then improvise and apply it to our particular settings. 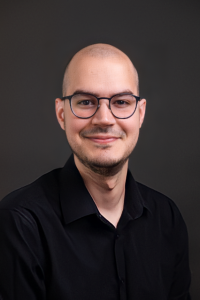 DITA is pleased to introduce Rafael Nieves-Rosario, our incoming Th.D. student for the 2022–2023 academic year.

Nieves-Rosario’s research interests lie at the intersection of theology, anthropology, and music. He aims to investigate the connections between jazz improvisation, the working of the Spirit, and the historical development of theological and biblical interpretation.

The idea for this project came to him during his M.Div. coursework at Covenant Theological Seminary. During a class with Dr. Jay Sklar on the Pentateuch, Nieves-Rosario learned to see the Law as formative for the affections. “Dr. Sklar taught us,” he says, “that the Law was not meant to be an exhaustive, normative code but a means for shaping the heart of believers to know the heart of God. Once we’ve ingested it, we can respond appropriately in our lives.

“That’s when it occurred to me,” he says, “that all interpretation of scripture is intrinsically improvisational. We ingest scripture and then improvise and apply it to our particular settings.” From there, the connection between theology and jazz grew. Just as the canon of scripture and the theology of interpretation around the Word develop through traditioned thinking, so too jazz improvisation requires a thorough knowledge of the tradition that comes before. “It was a profound class for my thinking,” Nieves-Rosario says.

Though the specifics of his research interests took shape during his formal training, his passion for the arts, scholarship, and the life of the church have been formulated since a young age. Born in Puerto Rico to professional musicians, Nieves-Rosario was raised in a curious and creative house of faith. In addition to being a concert pianist, his father was also the pastor of the Pentecostal church Nieves-Rosario attended for most of his childhood.

“I remember,” he says, “being very curious about theology and apologetics as a young child. I would ask my father, Why believe in the God of the Bible instead of in Buddhism or Confucianism? And he would say to me that he didn’t have all the answers but that we could look for them together.” They brought books home from the library and discussed them around the table. They debated about theories of atonement and theodicies.

And they played music. Nieves-Rosario learned guitar as a child and earned his bachelor’s in jazz, Caribbean music, and electric guitar at the Conservatorio de Música de Puerto Rico in San Juan. Throughout high school, he played for the worship team at his father’s church, and in college, he continued his musical ministry at Iglesia la Travesía Church. This congregation recognized Nieves-Rosario’s gifts and approached him about pursuing more formal theological training.

During his time at the Seminary, Nieves-Rosario also discovered Prof. Jeremy Begbie’s teaching about the Trinity and music. “I became very interested in how my training as a jazz musician could inform my studies, and when I discovered Begbie, I knew I wanted to study at Duke for a doctorate.”

During his first discussion with Prof. Begbie, Nieves-Rosario saw how jazz music related to the Christian faith more deeply. “It is a communal event. That is what makes it stand out from other art forms. All members of the ensemble must listen to each other. There is call and response, as there should be between members of the church and the Spirit.” He was thrilled when he received acceptance to the doctoral program.

And already his coursework in Latin American theology with Duke Divinity Dean, Dr. Colón-Emeric, and theological anthropology with Dr. Norman Wirzba have enhanced his research. Through these courses, he has become convinced that the lens of Latin American culture and anthropology is essential for his project. “Latin America understands humanity and existence communally. There is no concept of an individual. You see this in the culture and in the church, where they collectively improvise coritos (‘little choruses’) to God in worship.”

Indeed, Nieves-Rosario’s heritage—and the church—remain central to his research. “I always want to keep the church in my purview. It is for the good of the body that I study. That’s why I came to do a Th.D.” The Th.D.’s integration of theology and praxis were key for Nieves-Rosario, and we are grateful he has chosen to pursue this meaningful research at the Divinity School.

As he says, “The struggle of faith is always how to improvise beautifully in step with the Spirit.” Already he is helping us learn how to do so through his music and research, and we look forward to the continued fruits of his work and study here at Duke Divinity School and beyond.

Listen to Nieves-Rosario play with a worship band.