On March 30 Duke Divinity School held an installation ceremony for a commissioned painting by artist Bruce Herman. The painting, “Riven Tree,” is based on the resurrection of Jesus and hangs in the school’s York Room. 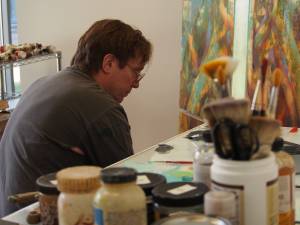 Herman, Lothlórien Distinguished Chair in Fine Arts at Gordon College in Wenham, Mass., was the Duke Initiatives in Theology and the Arts (DITA) Spring 2016 artist-in-residence. He previously took part in the Divinity School’s 2013 “Engaging Eliot” event on T.S. Eliot’s Four Quartets, which included an exhibition of paintings by Herman and artist Makoto Fujimura. During that event, the topic of a Divinity School commission on the resurrection first came up in conversation with the dean at the time, Richard B. Hays, who shared an essay he had written arguing that Eliot should have written a fifth quartet about the resurrection.

“As an artist, it’s thrilling to me to be in dialogue with people like Richard Hays, Jeremy Begbie, and Ellen Davis,” said Herman. “It’s an honor to be collaborating with theologians and scholars of their caliber and invigorating to be able to create in dialogue rather than the usual artistic autonomy.”

During his public lecture, “Making, Unmaking, Remaking: Conflict and Resolution in the Creation of a Painting,” Herman talked about his creative process, which begins with a drawing to which he adds dozens of layers of paint and metal leaf, drastically editing as he works, cutting through layers of wet paint to reveal palimpsests of his previous work. “I can be very brutal, almost unmaking the very thing I’ve been making,” he said.

“Riven Tree” itself went through an enormous transformation as upcoming construction in the York Room required that the original concept be reworked and cut down to one-third its original size after the artist had already worked on it for six months.

“It’s not unusual for an artist to have to engage in rather dramatic destruction in order to arrive at the thing that wants to come into being,” Herman said. “I would say that this is a bedrock principle of creativity. There has to be a willingness to lose the image, possibly to sacrifice it wholesale in order to find something truer and more fitting.”

“Riven Tree” is made up of five sections, which also correspond to the medieval elements of earth, water, fire, and air—and the mysterious fifth element known as the “quintessence” or “ether” which was believed to surround, enfold, and hold together all the other elements in the universe.

At the base of the painting, the predella section depicts the “time before time,” earth, the roots of the tree in Eden, and the fall of Adam. The two panels above that section depict fire and water, the “time of the cross,” our time, when the tree is riven and evocative of the burning bush. In the upper lunette panel is “time future,” where the element is air, the grid of the painting is transfigured in gold, and the tree is depicted as a sprout and fountain of new life. Finally, in the center panel, Herman has depicted “time outside time,” in a narrow vertical panel that represents Christ’s resurrection and ascension, and God’s presence as ether and quintessence, the place where heaven and earth meet, a “divine lightning strike.”

In making “Riven Tree,” Herman said he was striving to show echoes of the Resurrection in creation—in the cyclical, seasonal return of spring—“death giving way to life, in a kind of eternal springtide of creation.”

The commission was made possible through the generosity of Walter and Darlene Hansen. During his residency, in addition to delivering the public lecture, Herman spoke to classes and held open studio hours during which he worked on the painting.