For Holy Week in 2015, Duke Initiatives in Theology and the Arts (DITA) partnered with King’s College Chapel, Cambridge for their annual Easter at King’s. The week was the third festival DITA has participated in through the Duke-Cambridge Collaboration, which began in 2009. Featured were DITA collaborations with composer James MacMillan, theologian and author Lord Rowan Williams, pianist Cordelia Williams, poet Micheal O’Siadhail, and painters Makoto Fujimura and Bruce Herman. 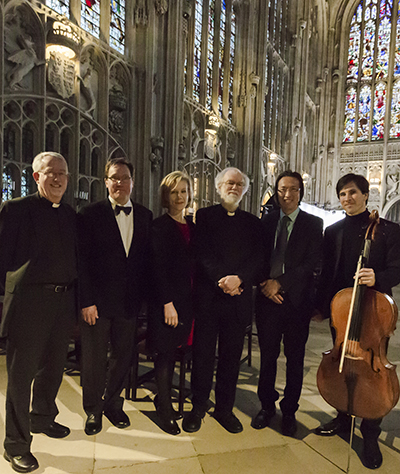 “I think we knew that we were in for an excellent week from the very beginning, but could hardly have imagined just how good, or in how many senses of ‘good,’” said Stephen Cherry, Dean of King’s College Chapel.

The “Engaging Eliot” exhibition kicked off the festival on Monday, March 30 with paintings by Fujimura and Herman inspired by T.S. Eliot’s “Four Quartets.” Lord Williams, former Archbishop of Canterbury, delivered a series of meditations on each movement of Eliot’s poem, and acclaimed actress Juliet Stevenson and cellist Guy Johnston accompanied him with readings and selections from Bach respectively. It was the first large-scale visual art exhibit to be housed in King’s College Chapel. In 2013, Duke Divinity School hosted a similar visual and musical celebration of Eliot’s work.

The festival left an impression upon both artist and audience. Lord Williams described the week as “deeply engaging and searching,” and participant Laura Sorrell said Holy Week at Cambridge was “not only memorable but life-changing.” 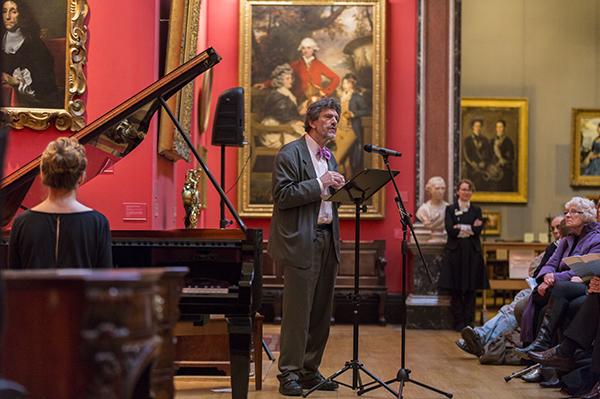 DITA contributed a number of significant events to the festival. A two-piano concert of Olivier Messiaen’s “Visions de l’Amen,” played by DITA director Jeremy Begbie and U.K. concert-pianist Cordelia Williams, followed a lecture, “Messiaen and New Creation,” given by Lord Williams. Award-winning Irish poet, Micheal O’Siadhail, gave a reading from Quintets, a DITA-supported work that explores how faith has responded to modernity. Jeremy Begbie composed a series of piano pieces to interweave with the readings, played by Cordelia Williams before a packed audience in the University’s Fitzwilliam Museum.

The week culminated on Good Friday with the U.K. premiere of James MacMillan’s St. Luke Passion, a work commissioned by Duke Divinity School and arising from a series of conversations between scholars and artists from both sides of the Atlantic. Prior to the concert, members of the group—Dean Richard Hays, Cambridge’s Regius Professor of Divinity David Ford, and Jeremy Begbie—joined MacMillan for a panel discussion. That evening in King’s College Chapel, under the baton of the composer, performers from London and Cambridge performed St. Luke Passion to a capacity audience. 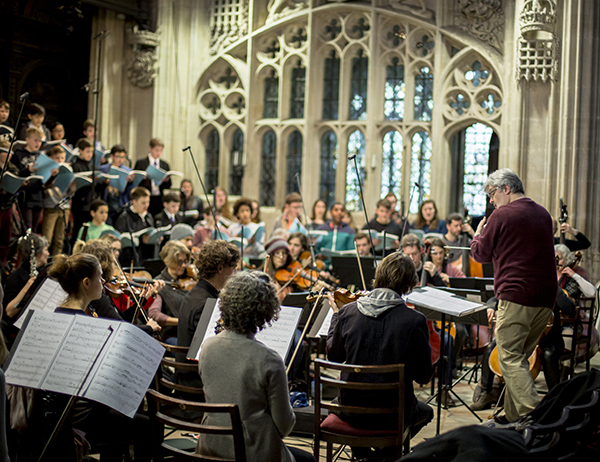 “I have attended all three Cambridge programs and each time I go away thinking this was the best,” said Doug Zinn, longtime DITA supporter and assistant executive director of the William R. Kenan Jr. Charitable Trust in Chapel Hill, N.C. He noted the festival’s unique combination of high scholarship and deep spirituality. “The program continues to set new standards for breadth and depth of experience,” he said. “There is no substitute for excellence and this program has a steadfast commitment to the highest standards.”