Duke Neurology Research Round Up, August 2021

Duke Neurology Research Round Up, February 2022 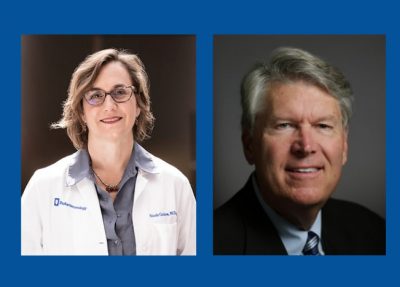 The awards from the Aligning Science Across Parkinson’s (ASAP) initiative position Duke as a national leader in understanding the origins and development of this devastating movement disorder.

Parkinson’s disease is a progressive neurodegenerative disease causing tremors, rigidity, slowed movement, and other symptoms. Close to one million people in the United States have Parkinson’s disease. While medications, lifestyle modifications, and surgical procedures can help with symptoms, no therapies can stop or reverse the course of the disease.

Liddle’s project will investigate the role that specialized cells in the gut known as enteroendocrine cells play in the origins of Parkinson’s disease. Parkinson’s is driven by the growth of toxic clumps of protein known as Lewy bodies in the brain. Lewy bodies are primarily made up of a misfolded protein known as alpha-synuclein. Liddle hypothesizes that enteroendocrine cells act as an entry point for corrupted alpha-synuclein from the gut to reach the brain. He believes these cells may be a target for future therapies.

“Enteroendocrine cells provide a potential pathway for corrupted alpha-synuclein all the way from the intestine through the vagus nerve directly into the brain,” Liddle said. “This knowledge gives us real insights into Parkinson’s disease — and may act as the foundation for designing therapies to treat Parkinson’s and other conditions caused by altered gut-brain signaling.”

ASAP is a coordinated research initiative to advance targeted basic research for Parkinson’s disease. Its mission is to accelerate the pace of discovery and inform the path to a cure through collaboration, research-enabling resources, and data sharing. The ASAP Collaborative Research Network, announced in 2019, comprises teams that bring together investigators across multiple disciplines, institutions, career stages, and geographies seeking to tackle key knowledge gaps in the basic mechanisms that contribute to Parkinson’s development and progression. The Michael J. Fox Foundation for Parkinson’s Research is ASAP’s implementation partner and issued the grant.

“Each team selected for the Collaborative Research Network brings unique expertise and perspective to ASAP’s mission of tackling key knowledge gaps in disease understanding through open science,” said Ekemini Riley, PhD, ASAP Managing Director. “We are proud to partner with Duke University on these innovative and impactful projects that will position the field closer to new treatments for the millions living with and at risk of Parkinson’s disease.”