Duke Neurology Research Round Up, August 2019 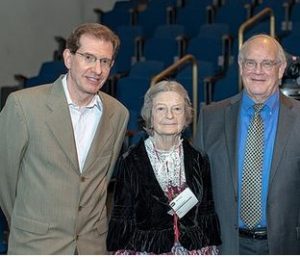 (This story originally appeared in the July 26 issue of the NIH Record. Read that version here).

Development of the therapy has been decades in the making. In 1991, as a graduate student at the University of Pennsylvania, La Spada was the first to show that a genetic mutation known as a CAG-polyglutamine trinucleotide repeat expansion was the root cause of degeneration in X-linked spinal and bulbar muscular atrophy.

Six years later, SCA-7 was found to be caused by this identical type of mutation. The rare autosomal dominant disorder causes degeneration in the cerebellar region of the brain and the retina, the light-sensing tissue in the eye. People with SCA-7 experience difficulty with fine motor activities, speech and walking. As the disease progresses, they often go blind.

SCA-7 involves a common pathology shared among neurodegenerative disorders: misfolded proteins that give rise to aggregates in the brain and other nervous system tissues. This commonality highlights the need for therapeutic strategies that prevent or reverse protein misfolding.

Yet despite this shared pathology, neurodegenerative disorders—from Alzheimer’s to Huntington’s disease—affect patients differently. In each disease, only select types of neurons are vulnerable to the accumulation of misfolded proteins.

La Spada continued studying SCA-7 because the retina is the most accessible part of the central nervous system and therefore is a promising proving ground for studying selective neuronal vulnerability.

Along the way, he and colleagues set their sights on staving off SCA-7-related blindness by preventing protein misfolding in the retina. With NEI funding, they tested an antisense oligonucleotide (ASO) therapy in a SCA-7 mouse model. That is, they injected synthetic fragments of DNA into the eyes of mice to bind the RNA responsible for encoding the disease protein. The treatment successfully reduced mutant protein and improved visual function, as reported in their 2018 paper in the journal Science Translational Medicine.

In cooperation with Ionis pharmaceuticals, La Spada is producing ASO therapy for patients with SCA-7. If things go as planned, they will begin clinical trials as early as next year.

In anticipation of the trial, NEI is coordinating a trans-NIH natural history study of SCA-7 to develop methods for tracking disease and measuring treatment effects.

The Sayer Vision Research Lecture Series features prominent scientists conducting vision-related research. It is co-hosted by NEI and the Foundation for the National Institutes of Health. Click here for more information about the lecture series and to view the videocast.