Young to deliver first DCNN seminar of 2020 on January 13 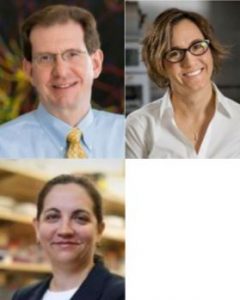 Three Duke researchers have received a grant of more than $1 million to study the role of astrocytes–common, star-shaped support cells within the brain–in the development of Parkinson’s disease. The award is part of more than $52 million in funding being given by the Chan Zuckerburg Initiative (CZI), which brings together experimental scientists from a variety of fields to better understand the root causes of neurodegenerative disorders.

Cagla Eroglu, PhD, (left in photo) from the Department of Cell Biology, will act as lead principal investigator, along with the Neurology Department’s Nicole Calakos, MD, PhD, (right in photo) the clinical principal investigator, and Al La Spada MD, PhD (center). Their research will examine how genes associated with Parkinson’s disease function in astrocytes, which control neuronal health throughout the brain. The team hopes to identify how genes associated with Parkinson’s are expressed by astrocytes, and how the resulting astrocyte dysfunction leads to neuron loss and neurodegeneration.

“This tremendously exciting project will greatly improve our understanding of the origins of Parkinson’s disease, and by extension, the entire family of neurodegenerative disease,” said Department Chair Richard O’Brien, MD, PhD. “I’m thrilled to see what these great scientists can accomplish as a team, thanks to the support of The Duke University School of Medicine, Duke University Health System and the Chan-Zuckerberg Initiative.”

The CZI Neurodegeneration Challenge Network seeks to improve our treatment and understanding of neuodegeneration by launching a collaborative network that will bring together scientists, physicians, and engineers to focus on neurodegenerative diseases as a broad class of disorders, with shared features and potentially shared solutions. Challenge Network researchers will focus on understanding the fundamental biology of what causes these diseases and how they progress, with an aim toward developing new strategies for treatment and prevention.

“Despite tremendous investment and progress in understanding these diseases, there remains a surprising amount of very basic information about their biology that we don’t know,” said CZI Science Program Officer Katja Brose. “By supporting these interdisciplinary collaborations and generating shared tools, resources and platforms, we hope to inspire a new approach to tackling neurodegenerative disease — one that leverages the combined power of basic science and technology to accelerate progress towards clinical goals.”