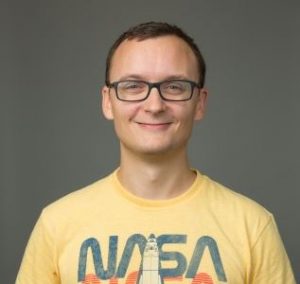 Pawel Switonski, PhD, became hooked on science as a high-school student, when he read how a 19th-century botanist used a prism, algae, and bacteria to discover the spectra of light used in photosynthesis. Now as part of the lab of Al La Spada, MD, PhD, Switonski is investigating the development and origins of neurodegenerative diseases. In this week’s Spotlight interview, he talks to us about the joys of seeing an experiment go right, the 700-year legacy of universities in his native Poland, and why we’re likely to find evidence of extraterrestrial life in the near future.

What are your current responsibilities within the La Spada lab? What does your typical day look like?As a postdoc in the La Spada team I am enjoying the happiest days of my scientific career, with a lot of independence in doing gratifying research but without the heavy burden of a  PI’s responsibilities. My scientific interest is focused on understanding the pathomechanisms of neurodegenerative disorders, including Parkinson’s disease and spinocerebellar ataxia type 7 (SCA7). Although we have been studying these devastating diseases for decades now, our knowledge is still not sufficient enough to provide a cure for patients. This aspect really motivates me to do my best at the lab bench.

My daily routine includes a bit of a time dedicated to cell culture work, microscopy, literature reading and a lot of pipetting. I also work with mice, so every now and then I take a refreshing 10-minute uphill walk to the vivarium where, with the enormous help of Jessica (our mouse colony manager), I perform experiments and maintain our SCA7 mouse lines.

How and when did you first get interested in biochemistry and molecular biology? How does your background in those areas inform your work to better understand neurodegeneration?

To explain that I need to go back to my school years. My parents were the first people who directed my interested towards biology. My mom is an anesthesiologist and she has always been incredibly dedicated to her patients and her work. Continuous conversation at the dinner table about pathophysiology, anatomy, medicine etc., had a large influence on my young brain.

When I was a high school sophomore I was reading a biology textbook by Claude A. Villee. The book described a wonderful experiment performed by Theodore Engelmann in the 19th century. Engelmann asked the question: which part of the visible spectrum is most effective for photosynthesis. He did not have sophisticated instruments that we have today, but he had a pretty good grasp on biochemistry, microbiology and physics. He designed his famous action spectrum experiment where he split visible light on the prism and illuminated a strand of elongated algae, exposing its different sections to different part of the spectrum. He knew that the byproduct of photosynthesis is oxygen, and that there is a species of bacteria that actively follows oxygen. He measured the magnitude of bacteria clamping in the proximity of the algae strand, and therefore indirectly measured the most photosynthetically active sections illuminated by red and violet light. The moment when I read about this experiment was eye-opening to me. I saw something that really captivated me and I think eventually made me a scientist. I saw scientific creativity at its finest. Up until now the best science is made using unexpected creative solutions and it is what I enjoy the most about my work.

Choosing molecular biology as my major in college was the next consistent step to broaden my understanding of fundamental principles of cell biology. After college I joined the lab of professor Krzyzosiak in Institute of Bioorganic Chemistry, Polish Academy of Sciences in Poznan, Poland. He was studying the biochemistry of RNA, particularly the structures of RNA strands composed of repeated trinucleotide elements. These tandemly repeated trinucleotides present in responsible genes cause numerous neurodegenerative disorders including Huntington disease and SCA7.

When I joined, the lab was gravitating from hardcore RNA biochemistry towards more biologically relevant areas and I was responsible for developing new mouse models of spinocerebellar ataxia type 3. We still have a lot to learn about neurodegeneration. But what we know for sure is that the cascades leading to neuronal death are initiated and propagated on the molecular level somewhere there, inside cells. My background in biochemistry and molecular biology help me plan experiments to dissect and investigate these molecular cascades.

You earned your master’s and doctoral degrees in Poznan, Poland before coming to the United States. How do the academic systems of those two countries compare? What do you miss most about Poland?

Poland has very strong academic traditions. Jagiellonian University in Krakow was founded in 1364 and is one of the oldest surviving universities in the world. Academic systems in both countries are fairly similar but also differ in some aspects. In both Poland and the US there are three levels of education – bachelor, master and PhD degrees. In both countries students receive their knowledge attending lectures and laboratory classes and struggle with finals at the end of semesters.

Differences? U.S. universities are ranked among the world’s best. Polish ones, not so much. On the other hand, there is no tuition in Poland. Education is free and the student debt is virtually nonexistent. Another substantial difference between the academic systems is that Polish academic staff is less mobile, compared to the US. People often get their degree, are appointed and stay at the same university for decades. But it is changing for better now, especially with the young generation. Thanks to many new programs sponsored, among others, by Polish Ministry of Science and Higher Education young scientists have more opportunities to do their short-term or postdoc trainings in the foreign institutions. I personally benefit from such a fellowship called Mobility Plus.

What do I miss most about Poland? Family for sure. I left my identical twin brother there. It is also hard for my kids because they really miss their grandparents and cousins. But with modern communication technology I stopped measuring the distance between the US and Poland in the units of distance. Instead I measure it in the units of the time difference. We are only +6h from Poland now.

What do you enjoy most about your work?
As I mentioned before, an opportunity to be creative. And this sweet moment when your experiment actually worked and you would like to dance a little bit but other people are there, so you make sure no one is watching and you dance anyway.

In addition to biochemistry, you’re also interested in astronomy and NASA. How long have you had these interests, and what interests you the most about these fields?
My dad was nine when he was watching American astronauts walking on the moon and he was hooked. When I was growing up, he influenced me with his passion. I inherited it from him.

I enjoy this nerdy part of me. I like reading about the progress in the rocket technology or keeping track of space probes visiting other worlds. But what really fascinates me is the planetary science and the prospect of finding extraterrestrial life. We live in special times. I strongly believe that in the next 15-25 years we will discover life in our solar system. Maybe on Mars (we are sending a rover there in 2020 to look for Martian life), maybe on Europa or Enceladus. And I am not talking about alien sentient life-form. It is going to be cellular life, or something similar. But such a discovery would be, in my opinion, the greatest discovery ever made by mankind. So many question to ask and answer. Extra-terra incognita. I am looking forward 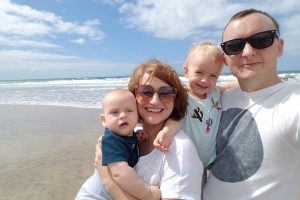 Switonski, his wife Dorota, daughter Basia, and son Kostek at enjoying a weekend in Wrightsville Beach just after they first moved to North Carolina.