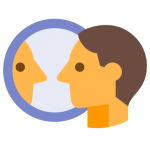 Cultural variation in the self has long been documented in the literature (Markus & Kitayama, 1991). Cultural neuroscience has been critical in furthering our understanding of the nature of cultural influences for a variety of reasons. First, this approach is advantageous because neural measures are implicit, and thus more sensitive to the spontaneous responses of the individual. Since cultural tendencies are reinforced and embrained, unlike self-report responses, we have discovered that neural measures reliably correlate with independent vs. interdependent self-construal. This insight is important, because it suggests that neural measures are more closely linked to the mechanism underlying many cultural differences (Kitayama & Salvador, 2017, Perspectives on Psychological Science; Kitayama, Varnum & Salvador, 2019, Handbook of Cultural Psychology).

Third, the study of culture with neuroscience methods is crucial, because it puts two competing views of the nature of cultural influences to the empirical test. On one hand, some scholars believe that culture is a superficial element that is extraneous to understanding psychological processes. 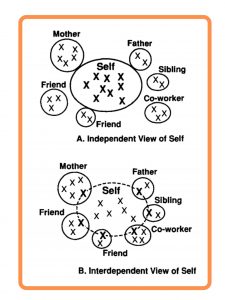 Others believe that culture and the psyche make each other up to the point where culture is inseparable from questions about human psychology (Markus & Kitayama, 1991) or biology, which is our perspective. If the latter is true, we may expect people of different cultures to show distinct patterns of neural activity even when they are asked to do nothing or rest. To test this, we turned to a neural oscillation known as alpha. Alpha varies in magnitude between people and tends to increase during rest. Our work and that of others has shown that alpha is a reliable marker of self-referential thought (Knyazev, 2012; Salvador, Kraus & Kitayama, in preparation).

Following up on this work, we hypothesized that there are cultural differences in how much people think about the self by default. We collected resting state data of two Asian (Taiwanese and Japanese) and two American (Michigan students) samples and quantified the amount of alpha during rest. Across all four samples we found that independent vs. interdependentself-construal predicted higher levels of alpha power, suggesting that independent people think about themselves more by default. Moreover, Japanese demonstrated significantly less alpha power than Americans (Kraus, Salvador & Kitayama, 2021, Biological Psychology). Our findings suggest that cultural differences in self-construal may not be superficial, but embrained and chronically present in the individual. These findings have several implications for understanding the nature of the self.

Prior work has established cultural differences in self-enhancement (vs. criticism). However, one question that has been difficult to address with self-report measures is what the underlying mechanism may be for this difference. To answer this question, we examined whether the tendency to focus on positive (vs. negative) aspects of the self, or self-enhancement (vs. criticism) can be distinguished early on in processing. As in prior work, we found that Americans were self-enhancing, whereas East Asians (Taiwanese) were self-critical on self-report measures. Importantly, consistent with the notion that these biases are genuine and culturally reinforced, we found that Americans and people high in independent self-construal showed greater self-referential processing as indexed by alpha power in response to successes (vs. failures) for the self. Conversely, Taiwanese and people low in independent self-construal did not. The cultural difference in alpha in response to successes (vs. failures) predicted self-report measures of self-enhancement (vs. criticism).

Our findings suggest that the cultural difference in self-enhancement (vs. criticism) is genuine because it is explained by a cultural difference in spontaneously allocated self-referential thought (Salvador et al., In Press, Journal of Experimental Psychology). This work shows how deeply the influence of culture extends and provides a new approach to examine cultural variation in the self.