Posted on February 11, 2018 by Anne Harshbarger

Back in the classroom, students participated in the “Circle of Viewpoints and Journey of X mural activities (Creative engagement activities, page 22) as part of DUML’s Program on Marine Debris. In these activities, each student thinks about the the lifespan of a piece of marine debris they collected, and how it arrived on our local beach. By brainstorming about where the marine debris came from, how it got to where they found it, and the journey it took to get there, students think about the interactions of people, places, and cultures, and how individual and local actions can affect people, places and environments all over the world.

Below are examples from students in Ms. Horvat’s fourth grade class at Morehead City Elementary School. These four students described the journey of a flip flop, a gatorade bottle, and cigarette butts that they found on our local beaches. Cigarette butts and single-use water and gatorade bottles are major finds during every marine debris cleanup here in Carteret County. Worldwide, a total of 1,863,838 cigarette butts and 1,578,834 plastic beverage bottles were found by cleanup volunteers in 2017 [1]. 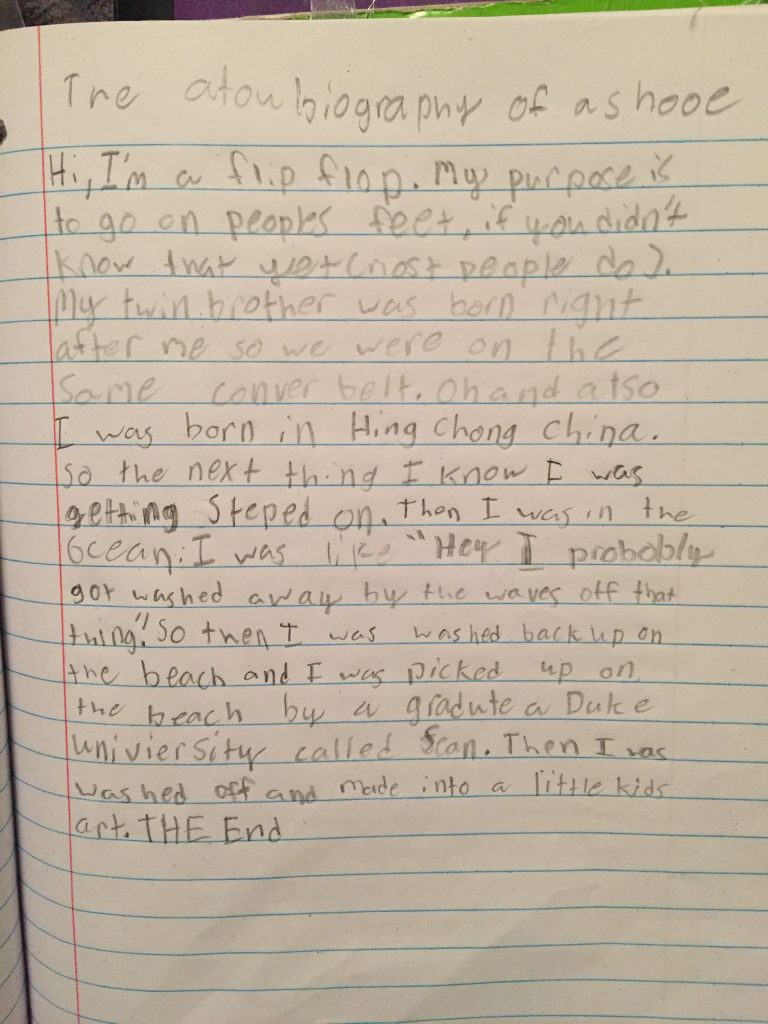 One student imagined that the flip flop was worn by someone in Hong Kong, China. And when that individual walked in the ocean, the flip flop got washed away by the waves and travelled across the oceans to Beaufort, North Carolina where it was picked up by one of her classmates and made into art. 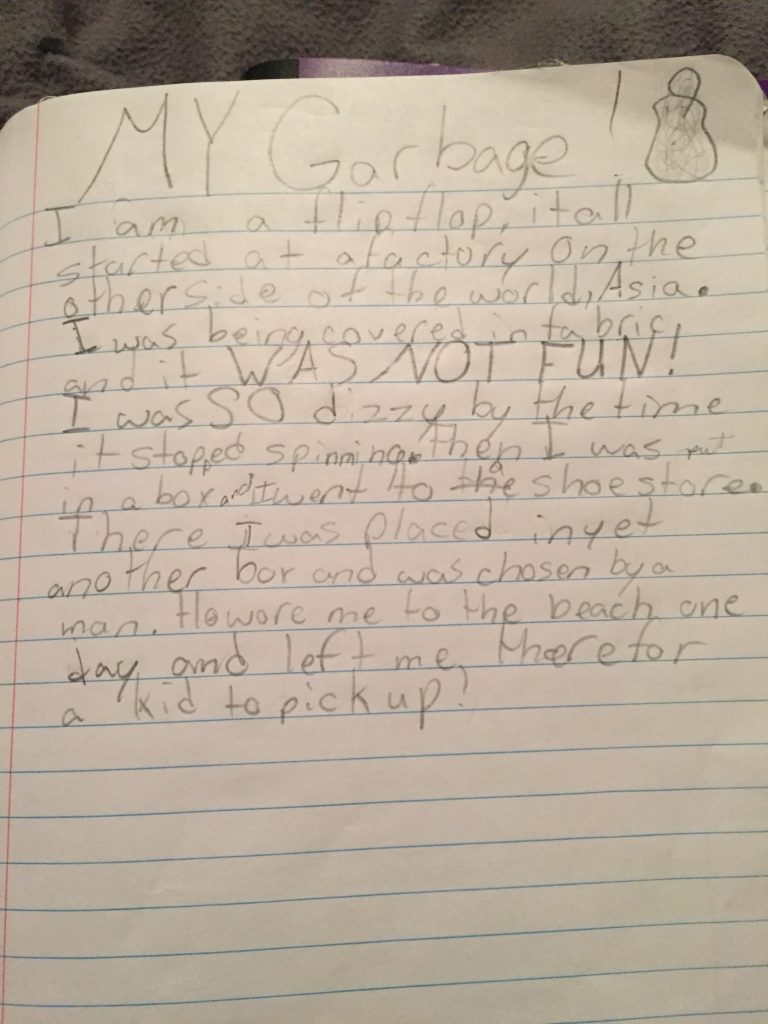 Another student described the flip-flop starting its journey in a factory. After being putting in a box to be shipped to the shore store, a man bought the flip flops. He wore them to the beach one day and left them there for a kid to pick up! 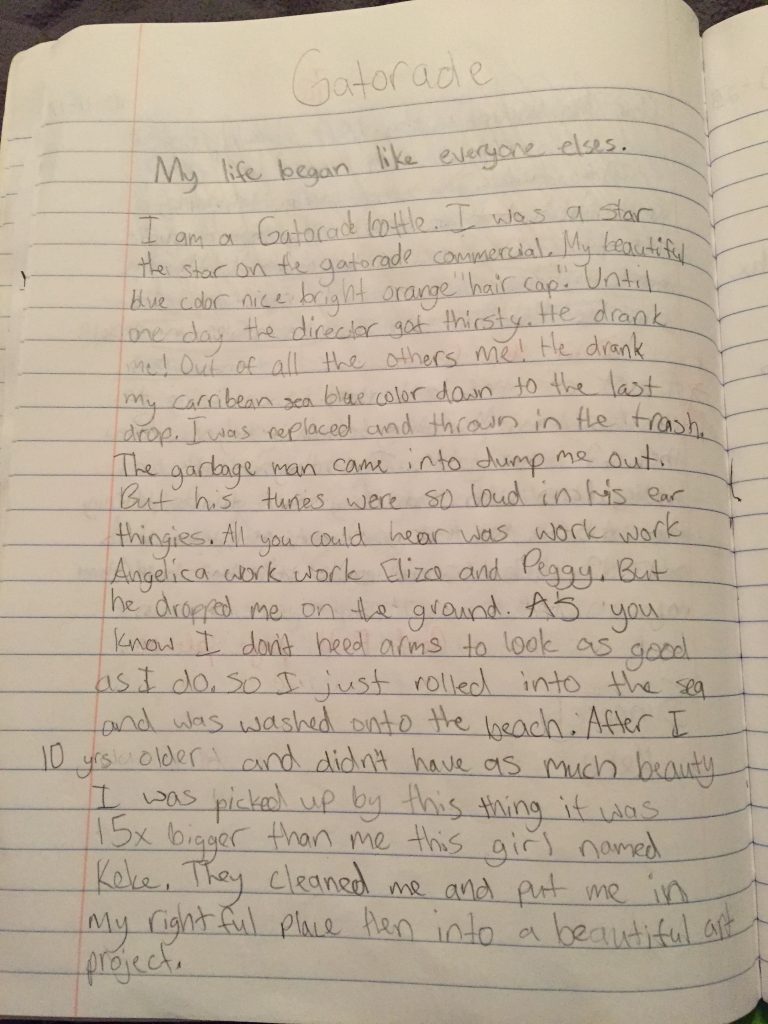 The journey of a gatorade bottle was also described. When someone drank the “Caribbean sea blue color down the the last drop”, it was thrown into the trash. When the trash man came to the take the trash out, he accidentally dropped the gatorade bottle on the ground. The bottle rolled and rolled into it reached the sea and eventually washed onto the beach. After 10 years, the bottle was picked up by a girl 15x bigger than it was who cleaned it and put it in its rightful place, a beautiful art project. 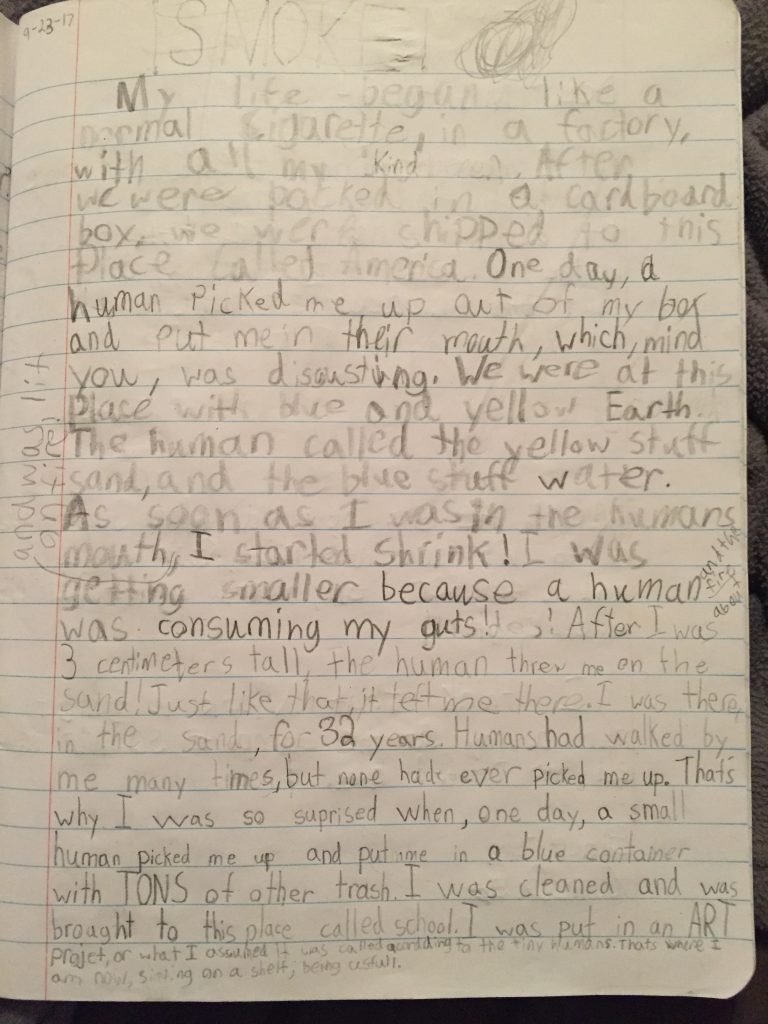 One fourth grade student describes the journey of a cigarette coming to a place called America after being made in a factory. One day, a human picked it up and put it in his mouth when he was at a place with “blue and yellow Earth”, which he called “sand” and “water”. After the cigarette started shrinking to be three centimeters tall, the human threw it on the sand and left it there. The cigarette was in the sand for 32 years; humans walked by many times but never picked it up. One day a small human picked it up and put it in a blue container with tons of other trash. It was cleaned and put into an art project, which is where it is now, sitting on a shelf, being useful, and teaching others what the students have learned about marine debris.