What is Coherent Elastic Neutrino-Nucleus Scattering?

As we like to call it, CEvNS (pronounced “sevens”) is a process that is well understood within the Standard Model of particle physics.  The Standard Model has been well tested in many different experiments and includes the predicted Higgs boson that you have probably heard about.  Since CEvNS is a Standard Model prediction, like the Higgs, it should in fact exist and it should be tested for.  The main aim of the COHERENT collaboration is to make a first direct measurement of CEvNS.

As the name suggests, CEvNS is the process of a neutrino scattering off of a nucleus in both an elastic and coherent way.  We won’t get into the many ways that neutrinos are interesting, but you can find a number of good sources out there.  For our purposes, all you need to understand is that it is a fundamental particle (like an electron or a photon), it is very light, and it very rarely interacts in matter.  In fact, on average, a low-energy neutrino would pass through an entire light-year of lead before interacting even once.  Some people describe neutrinos as “elusive” particles because of the difficulty in detecting them.

How do you look for CEvNS and why is it difficult for us to see it?

First we should talk about how you detect neutrinos.  There are many experiments all around the world looking at neutrino interactions.  In fact, the Nobel Prize in physics in 2015 went to the discovery that neutrinos have mass.  Typically the way you detect a neutrino is through what is called the charged current interaction where a neutrino turns into its lepton counterpart.  A fast moving neutrino can transform into an electron (or muon, or tau) and that particle moves through your detector.  Scientists have gotten very good at detecting this process.  It is still rare, because neutrinos rarely interact, but very large experiments have been built to look for neutrinos coming from the sun, the atmosphere, reactors, and other sources.

For CEvNS, the detection method is different.  Here, the neutrino doesn’t change into another particle.  It simply bounces off the target and continues on its way.  So the signal for this process is not a fast moving electron or muon, but is a very slow-moving nucleus.  The neutrino bounces off of the nucleus and just like in any collision, both objects feel the impact.  It is very similar to bouncing a ping pong ball (the neutrino) off of a bowling ball (the nucleus) and measuring how the bowling ball rebounds.  As you can imagine, doing this for a heavy nucleus is very challenging and this is why it has taken more than 40 years since theorists predicted CEvNS until detection.  Only in recent years has detector technology (developed for looking for dark matter particle recoils) been available for detecting the tiny recoils from CEvNS. 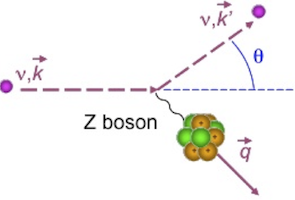 For the COHERENT detectors, we are looking for these very small nuclear recoils on multiple kinds of nuclei.  Using several different detectors allows us to take advantage of each systems strengths while working around weaknesses.  We are also using one of the best neutrino sources in the world for this kind of measurement, although it was built to do entirely different things.  The Spallation Neutron Source at Oak Ridge National Laboratory was built to do neutron physics, but their neutron production process also generates a huge number of neutrinos that have just the right energies for coherent scattering.  Having very sensitive detectors near a very intense neutrino source with just the right neutrino energies will allow us to finally measure this process.

So why should we care?

We will need to do to determine if the CEvNS measurements that we make are consistent with the Standard Model.  Measuring the predicted value would confirm that the Standard Model works well for this kind of interaction and would only increase our confidence in the model.  If we were to measure a value that is different from the prediction, this would suggest that there is new physics there we don’t fully understand yet.  And that would be very exciting.

In addition to confirming the model prediction, measurements of CEvNS on different nuclei would help us better understand some of the processes involved during supernovae (when stars explode).  It will also help with backgrounds for future dark matter experiments.  We could even possibly test for a potential mysterious sterile (non-interacting) neutrino.  The CEvNS processes is an important one and we are excited about continuing the search on many on many other nuclei.

The measurement of coherent elastic neutrino-nucleus scattering (CEvNS) has been a “holy grail” in low-energy neutrino physics since its prediction almost 40 years ago. The scattering process is analogous to the coherent forward scattering of photons on atoms. This elastic scattering proceeds via the neutral weak current and benefits from a coherent enhancement to the cross-section. The enhancement, a purely quantum mechanical effect, is approximately proportional to the square of the number neutrons in the nucleus. The full coherence condition, when the wavelength of the scattering is longer than the size of the nucleus, is guaranteed for nearly all nuclear targets when neutrino energies are <10’s of MeV. Such neutrinos are produced in copious amounts at nuclear power reactors; a fact which suggests that a deployment to a reactor is an ideal location for such a search. Neutrinos with slightly higher energies (>10’s of MeV) are also available at stopped-pion beams, a background-suppressing pulsed neutrino source like the Spallation Neutron Source (SNS) at Oak Ridge National Laboratory.

In supernova dynamics, it is the coherent neutrino scattering process which has the largest cross-section, helping to expel material outward. As such, it should be measured in order to validate astrophysical models. A large enough detector can be used to efficiently detect neutrinos of all species from a nearby supernova, allowing a determination of the oscillation pattern and thus the total energy and temperature of the event. Also, a number of experimental searches for physics beyond the standard model can be performed with a coherent neutrino scattering detector. A flavor blind detector (10’s of kg) operated at the SNS can perform searches for sterile neutrinos, provide a sensitive test of the weak nuclear charge and search for supersymmetric extensions to the standard model. Detectors that incorporate several target nuclei can probe the effect of non-standard neutrino interactions such as flavor-changing or non-universal neutral-current scattering. The CEvNS cross-section is also highly sensitive to the neutrino magnetic moment. An experiment located at a stopped pion beam, such as COHERENT at the SNS, can access neutrinos with slightly higher energies for which the coherence condition begins to break down. Such an experiment would then be able to probe the neutron structure of the target nuclei using neutrinos.

To date, the inability to measure the CEvNS cross-section, for which the signature is typically a sub-keV nuclear recoil, can be attributed to the scarcity of available technology. What is needed is a detector with a large enough mass (>1 kg), low enough backgrounds and a low enough threshold (<1 keV). Recent developments in WIMP detection technology have enabled this.