Genetic adaptation to zoonotic viruses: how did chimpanzees adapt to SIV/HIV infections?

This conversation was led by Aida Andres, Associate Professor of Genetics, Evolution & Environment at University College London. The Human Immunodeficiency Virus (HIV) is the retrovirus that causes AIDS, and as such it is responsible for one of the deadliest pandemics in human history and remains a critical health issue globally and especially in Africa. HIV jumped through zoonotic transmission from chimpanzees (where the virus is called the Simian Immunodeficiency Virus, SIV) to humans, who as a naïve species do not deploy an immune response that controls infection and develop AIDS. But wild chimpanzees naturally infected by SIV typically don’t develop acute immunodeficiency, and while SIV may have fitness consequences, it does not have the acute health effects that it has in humans. This is likely because chimpanzees have been infected for tens of thousands of years and have evolved to reduce the pathogenicity of the virus. Using a battery of evolutionary population genomics tools and datasets, we find strong evidence of genetic adaptation in multiple sets of genes involved in infection and immune response to SIV, with different host adaptation strategies at different times and in different populations. Our results confirm the importance of SIV as a selective factor, identify specific genetic changes that may have allowed our closest living relatives to reduce SIV’s pathogenicity, and demonstrate the potential of population genomics to reveal the evolutionary mechanisms used by naïve hosts to reduce the pathogenicity of zoonotic pathogens. 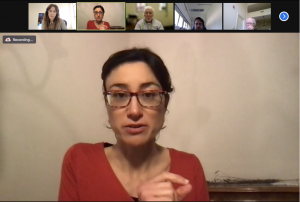