This conversation was led by Amanda Lea, Assistant Professor of Biological Sciences at Vanderbilt University. The evolutionary mismatch hypothesis, a core tenet of evolutionary medicine, seeks to explain many of our largest health burdens today. This hypothesis posits that traits that evolved in response to past selection pressures are often imperfectly or inadequately suited to modern environments, leading to disease. At the genomic level, mismatches are thus a predicted outcome of genotype x environment (GxE) interactions, such that loci that were neutral or beneficial in past environments become detrimental when exposed to modern diets, activity patterns, or other conditions. However, GxE interactions have proven difficult to identify, especially at genome-wide scale. Here, Lea described research using two high-powered model systems that seeks to uncover GxE interactions: (i) investigation of the genetic basis of gene expression in immortalized human cell lines exposed to a dozen cellular environments and (ii) investigation of the genetic basis of lifespan in fruit flies exposed to control versus obesogenic, high sugar diets. Results from both projects emphasize that GxE interactions are indeed a key component of the genetic architecture of complex traits, and that natural selection plays a role in maintaining their presence. Together, this work begins to uncover how historical selective regimes shape phenotypic diversity today, and how abrupt environmental shifts alter the relationship between genotype and phenotype. 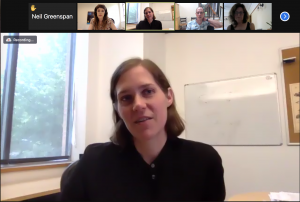