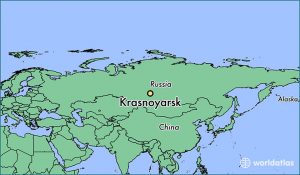 After two thousand versts (kilometers, sort of) of “cold, flat plain, crooked birch trees, puddles, an occasional lake, snow in May, and the desolate, depressing shores of the Ob tributaries” east of the Urals,

was struck with the “original, majestic, and beautiful” natural landscape that begins with the Yenisei River, near Krasnoyarsk. He even gives way to lyrical flights–something we don’t usually associate with his style (but I’m right here by his side).

Not to offend Volga enthusiasts, but over my lifetime I have never seen a river more majestic than the Yenisei. Yes, the Volga is a modest, mournful beauty, decked out in her finery. But the Yenisei is a mighty, furious bogatyr, a larger-than-life elemental hero who has more strength and youth than he knows what to do with.  On the Volga, man started out with reckless ambition, but ended in a groan, that is a song; bright, golden hopes turned into a kind of impotence that has come to be known as Russian pessimism; On the Yenisei life began with a groan, but will end with a reckless ambition the likes of which we haven’t seen even in our dreams. This is at least what I thought when standing on the bank of the great broad Yenisei, gazing greedily at its water, which with terrible speed and force rushes onward to the severe Arctic Ocean.

from Chapter IX of From Siberia

When admiring the Yenisei, Chekhov speaks my language, though I hit Krasnoyarsk on a fine, warm  “Indian summer” (бабье лето) day, and the water was calm. 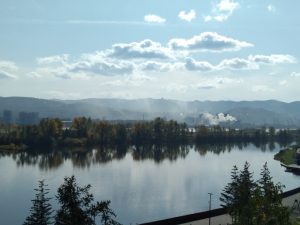 Even the smokestacks of the factory over there on the right add to the beauty, and to that story that the Siberian clouds have been telling us throughout our journey.

For citizens of Krasnoyarsk the most important part in Chekhov’s travel notes comes when Chekhov calls their town “the best and most beautiful of all Siberian cities.”  Krasnoyarsk respects and loves the Yenisei, and has 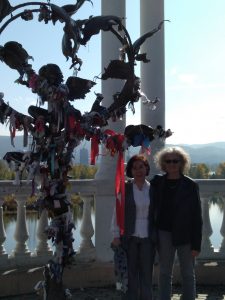 lined its bank with a great long promenade complete with trees, walking paths, park benches, and various attractions. I came here with Natalya Kovtun, Professor and Doctor of Philology at Astafiev Krasnoyarsk State Pedagogical University, and author of books and articles about Russian literature, socio-cultural mythology, utopia, and village prose. These topics, not to mention Dostoevsky and Chekhov (of course) kept us in animated conversation until we reached this high viewing platform.

At which point the mighty river commanded us to be still.

The Yenisei’s spell is so strong that we neglected to turn around (except for this photo). If we had, we might have spotted my quarry: a monument to Chekhov! He occupies a place of honor on the square in front of the Krasnoyarsk Opera and Ballet Theater. I attest that I did breathe the air near the  monument, but ultimately had to steal this photo from the internet: 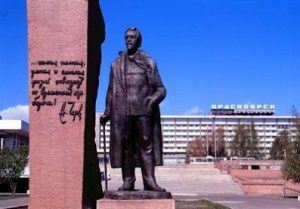 Now I might be just making this up, but it seems to me that this Chekhov is presented in the Siberian monument mode of Explorer and Conqueror. Anton Pavlovich leans into the wind, which blows his tie picturesquely to the side; it is the same wind that churned those Yenesei waves just a few moments ago. We have seen this heroic style, for example, with Ermak of Tobolsk, or, dare I say, with this very Lenin, whom we saw a couple of posts ago

(or a couple of hours ago here in Krasnoyarsk, a few blocks back into town from the river, on the other side of Gorky Park, or, in fact, in many other cities across the land),

or even the triumphant Dostoevsky, whom Sergei, Nastya and I saw at the moment of his release from the Omsk fortress. (There’s even a tinge of Sir Walter Raleigh, from my neck of the woods.) 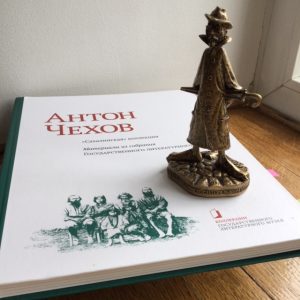 This particular Chekhov offers quite a contrast to his barefooted Tomsk version.  Which is OK; there are many Chekhovs, and many ways of viewing (and reading) him. Let Krasnoyarsk have this Chekhov. And since Chekhov is my role model, let me, too, stand up straighter, flip my scarf to one side and make a half-turn into the wind.

However you read the Krasnoyarsk Chekhov, it’s pretty impressive he left such a strong mark, given that he spent just one day here (just slightly less than I did). He did not conquer the river, or occupy the territory for Russia, or defend the city against attackers; basically he just passed through–and wrote some things down.

But that was enough. It brought me here, after all.

A stroll around the Krasnoyarsk leads you to treasures such as these majestic wooden buildings, which are nestled into the modern cityscape: Remembering Tomsk, you indulge in a momentary fantasy, dismantling the modern concrete buildings that surround these beauties, and reconstructing in your mind whole rows of them. Many are, rather, were, part of households, which include outbuildings–sheds, barns, a bathhouse–gathered in cozy, fenced-in courtyards. The estate of  the artist Surikov, whose museum you can visit here (as I mentioned in Tobolsk…), gives a good impression of what that way of life was like. 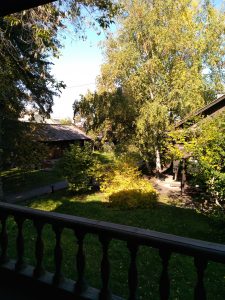 On my second day in Krasnoyarsk, at the invitation of senior instructor Oksana Tolstonozhenko I participated in a public discussion with literature and journalism students (“Russian Classics today: a Meeting and Conversation”)  at Siberian Federal University (Here is their website: http://ifiyak.sfu-kras.ru.  Energetic young instructors, Yulia Ulyankina and Yana Bazhenova had prepared an interactive lesson about the ways pop-culture co-opts literature for its own purposes (for example, using literary characters as models for certain pathologies). Our short but action-packed discussion reminded me of why we always come back to Tolstoy, Gogol, Dostoevsky, Chekhov (and the others) when we realize that our “big questions” about justice and injustice, love and duty cannot be answered.  Yana and Yulia quoted from self-help websites that cite literary characters’ experience (Anna Karenina, Raskolnikov) as cautionary examples. Until you go deeper, you might find yourself using literary plots as sources of advice as to how you should behave when facing impossible choices. But of course we know that the purpose of great literature is deeper than that. I too am Anna, and I don’t need some social scientist to prove to me what is the right thing to do when I reach the crossroads. Door Number One will plunge me into the depths of hell. Door Number Two will leave me frustrated and self-righteous for the rest of my life. Like I don’t know it’s wrong??

It’s called life. Close your eyes and jump in! Join the rest of humanity! Both choices are right, and both are wrong. Anyway, in here, in the book, you get to spend time with someone whose experience you recognize, and whose suffering you share. That’s tragedy, and sorry, it does not provide easy answers.

Or, hey, take a break and read some comedy. Funny stuff also makes life worth living.

Here in Krasnoyarsk, yet again, I was impressed with the seriousness, professionalism, and passion that our Russian colleagues bring to the classroom.  I learned a lot from Yana and Yulia’s ability to make literature relevant to their students’ daily lives, while stimulating them to think critically and deeply.  This alert crop, I learned, contains some budding authors–possibly a new Dostoevsky, or maybe a new Chekhov.  I look forward to seeing their works on the shelves in a few years. And maybe my students back in the US will translate them. Bring it on. To my excitement, Vladimir Kirillovich is an expert on one of our blog heroes, the archpriest Avvakum. Duke students take note. This journey of mine is turning out to be, along with everything else, a justification of my own obsession with this crazy Russian genius and his autobiography–itself, like this, a Siberian travelogue. It is always good, when you’re fanatical about something, to find fellow travelers on your journey–or at your stopping points.

I would have enjoyed spending some more time in this very interesting place, but like Chekhov, I had to press on. Yana, Oksana, and a very strong young man and expert Russia driver, Yevgenii,  kindly delivered me to the train station. Like most other Russian drivers I’ve met, Yevgenii prefers to carry your suitcase, rather than rolling it on its wheels. By whatever means, it is a beautiful thing when you don’t have to carry it up all those stairs yourself.

By mid-afternoon, I was speeding eastward through birch forests, flooded meadows, and, when night fell, a black sky teeming with stars, the same ones we never get to see back home in any city.