in quest of New Time

Quests begin with people (Chekhov for example, and Chekhov people). Fortunately some of the best people are Chekhov people; take, for example, Anatoly Sobennikov, scholar, author, traveler, Siberian, and now St. Petersburg resident. Anatoly will give many valuable tips about tracking Chekhov’s footsteps to the most distant places. I learn from him that one can simply buy a plane ticket from Moscow to Sakhalin Island, and skip all the land in between (7 time zones worth). But what would be the fun in that?  So Anatoly also gives me extremely valuable advice about stops to make on an overland Chekhov trip across Russia. Journeys start somewhere, and we are in St. Petersburg–the Westernmost of Chekhov’s Russian stopping places.  So let us begin here. Anatoly leads me to Italyanskaya Street, whose cobblestones are among many Chekhov must have trod on his visits to St. Petersburg beginning in the late 1880s.

Chekhov did not live in St. Petersburg; he was a Moscovite and a Melikhovian, but  the major players in the Imperial Russian publishing world were based here. Of these the most important was Alexei Suvorin, influential publisher of New Time newspaper and owner of a network of bookstands at railway stations all across Russia.  Suvorin knew everyone (including Dostoevsky, btw), and was detested by the liberal establishment for his conservative politics and the increasingly anti-Semitic slant of his newspaper. But he was Chekhov’s publisher and friend, and it was to him that Chekhov wrote some of his most fascinating and thoughtful letters.

My attempts to plunge into deep literary thoughts at this important starting point in my journey are thwarted by a light, chilly drizzle. My brand-new umbrella, carefully purchased and packed for just this eventuality, flails impotently, broken on its first unfurling. Blog readers will not get their dose of profundity, at least here. Just a bit of damp whining. 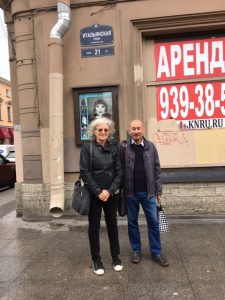 Speaking of whining (the Russian word, a thing of beauty, is “nytyo” [нытьё: ныть, ною, ноешь, ныл, ныла, будем ныть…]): we are reminded of Chekhov’s elder brother Alexander, who, to judge from the epistolary evidence, spent as much time whining and complaining as he did  at his job at New Time, where (if I may be catty), probably by sinecure, he “worked.”  Alexander, too, trod these stones on his way to and from Suvorin’s editorial offices, which were located at 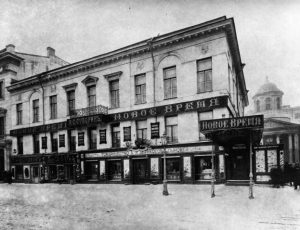 42 Nevsky Prospect, just around the corner.

He wrote his share of stories and other pieces, but his greatest service to humanity was to live far away from his younger brother, the genius Anton. The distance between sparked a lively correspondence that went on for years, importantly, generating some of Chekhov’s most expressive and colorful letters.

A quick stroll down Italyanskaya Street leads past the famous Stray Dog cafe: 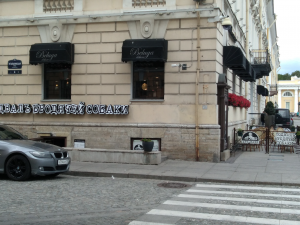 It’s literary (google it), but not OUR literary, so let us move on. Down the street we encounter, deliciously for the Chekhov afficianado, something called the “Museum of Emotions” (????), or an ad for it, or something: 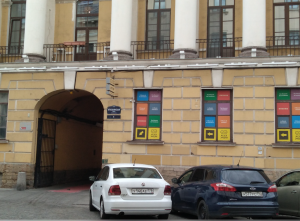 Would stop in, but I doubt anything could live up to that name, especially for those of us who’ve traveled into “Ward No. 6” and back. Plus,  Anatoly has told me about a cool exhibit at the Manezh, “Predictions and Revelations” (Предсказания и откровения). Has a Dostoevskian ring to it….must go for a chaser.

Along the way, forgive me: 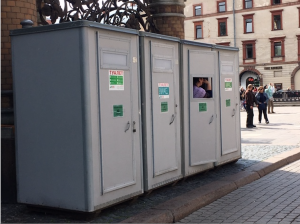 There must be a story here, something Chekhovian.

Anatoly is one of the very best Chekhov scholars. Stay tuned for his book on gender and sexuality in Chekhov’s writing. I for one can’t wait.