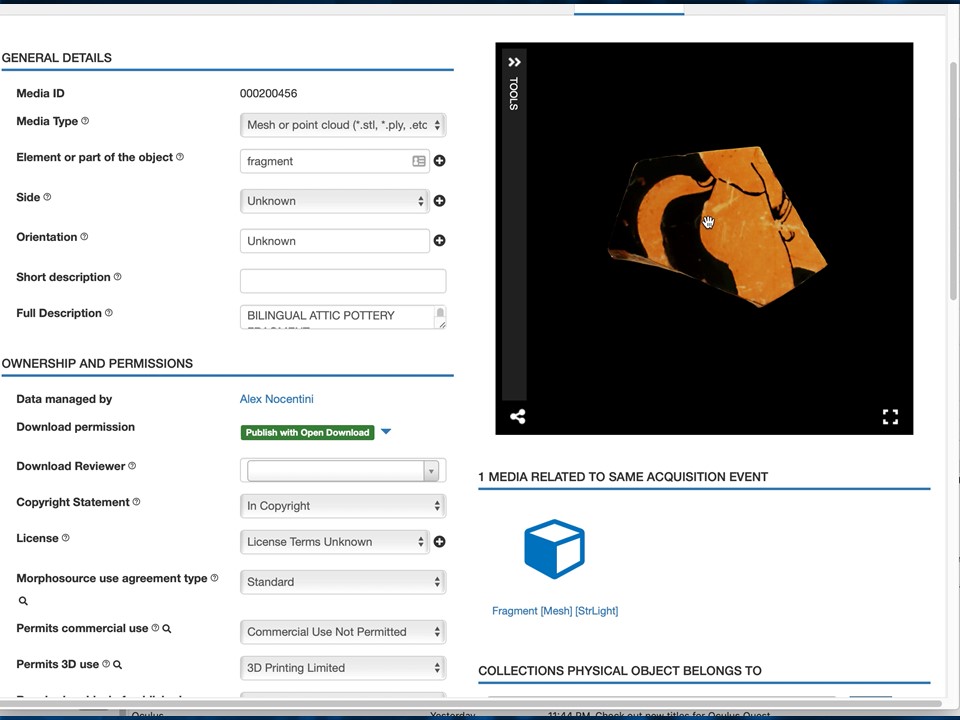 The Etruscan Foundation (https://www.etruscanfoundation.org/), and Delmas Foundation (http://delmas.org/) have awarded Prof. Maurizio Forte funds to create a 3D repository of unpublished archaeological material coming from the urban excavations in Vulci . Given the large amount of classifiable objects it is impossible to restore and preserve all of them for public display. Therefore, the only possible solution is digital preservation and archiving. This project will be one of the first experiments of 3D digital repository of archaeological material (3D objects, database + metadata) by using an open source digital platform developed at Duke University, Morphosource (https://morphosource-demo.lib.duke.edu/).

The 3D repository will constitute the first fundamental step for the final digital publication of the entire excavation and it will be the first digital platform worldwide for the 3D visualization of parametric models of archaeological finds (Etruscan, Greek and Roman) from stratigraphic archaeological excavations.

Vulci (fl. 10th cent. BCE- 5th cent. CE) was one of the largest and most important cities of ancient Etruria and one of the biggest pre-Roman cities in the 1st millennium BCE in the Italian peninsula.

The investigation of Vulci presents a rare opportunity to study city-plans and urban infrastructures and for interpreting the organization of public spaces across time and cultures. The emergence of Vulci as an Etruscan settlement and its transformation into a Roman city involved important political, religious, and social changes, identifiable by comparative analyses between architectural spaces, trade and materials’ production. Duke’s excavations in the urban core identified over 6000 classifiable objects in different categories (pottery, coins, tools, architectural elements, metal, and wall decorations) which will contribute significantly to the study of urban archaeology in the Italian peninsula.

Anticipating the power of 3D data and virtual reality for preserving, studying and communicating information about this unique site, the excavations at Vulci are entirely documented in 3D thanks to a combined use of 3D photogrammetry, georadars, multispectral drones and laser scanners. Vulci team has made use of VR tools (Unity 3D, Oculus Quest, HTC Vive) to create example immersive experiences