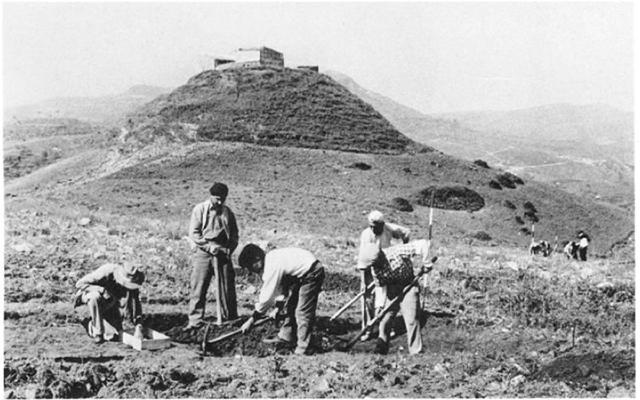 In 1957, Princeton University began excavations on a plateau in the locality known as the Cittadella, a hilltop to the east of the city at Serra Orlando where excavations had commenced two years earlier. Though this area would soon prove to be the location of Iron Age and archaic habitation and cemeteries, the first trench uncovered a Hellenistic sanctuary. It took the form of a multiroom structure with a large central courtyard, entered from a street running south to north down the slope. “Neighborhood” shrines of similar form, all apparently dedicated to Demeter and Kore, are incorporated into the orthogonal plan of the later city. Their use came to an end with the Roman capture of Morgantina in 211 B.C.E. The excavations of the 1950s also uncovered finds indicating an earlier phase of use, including part of an apsidal structure, probably of the seventh century B.C.E., below the floor level of one room. More recent excavations show that the southeast corner of the sanctuary was founded directly on the floor of a very large Iron Age longhouse that preceded the archaic settlement. In 2012, work focused on completely excavating the sanctuary’s northern and western limits, an attempt to better understand the history of the sanctuary. We were able to document the limits of the shrine, locate a secondary entrance, and add to our understanding of third-century patterns of cult throughout Morgantina.
A cache of terracotta figurines found in 1957 included representations of Persephone. A small bronze plaque depicting Herakles was also recovered, but the object later was recognized as an ornamental hook from a belt of Samnite origin and dated to the fourth century B.C.E. In contrast to the richness of the other city sanctuaries, little pottery was recovered. The sanctuary’s cistern contained a use fill and fragments of a black-gloss ribbed amphora. At least five vases of East Sicilian Polychrome Ware (formerly “Centuripe Ware”) were found in the rooms, but other finds of this period were scanty. The latest coins recovered are issues of Hieron II. It seems likely that the sanctuary was abandoned, along with the community it served, before the approach of the Roman army in 211 B.C.E. It is possible that most of the votives were removed before the Romans arrived and that the cache of figurines was left to indicate that the temenos was still sacred. The few vases found in the building probably were damaged and discarded during the evacuation.