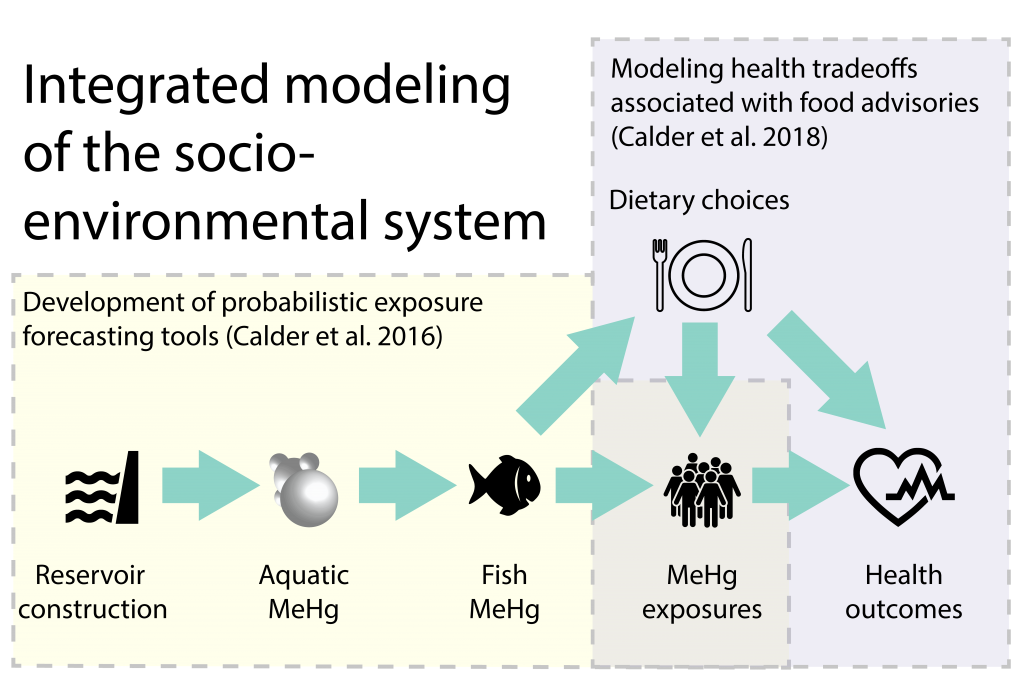 Reservoir creation associated with hydroelectric power development accelerates the production of neurotoxic, bioaccumulative methylmercury (MeHg). This poses a risk for indigenous populations and other consumers of seafood from environments affected by reservoirs. However, seafood is a healthy dietary alternative, especially for indigenous populations who suffer from high rates of food insecurity.

This work synthesized the state of the science of MeHg biogeochemistry, toxicokinetics and epidmeiology into an integrated modeling framework to describe the likely range of human health impacts (based on current understanding) as a function of environmental conditions, reservoir design and local human diets. The mechanisms responsible for production and accumulation of MeHg in aquatic ecosystems and its health impacts on humans are the subject of ongoing research, and so this work is subject to re-evaluation as underlying science evolves. 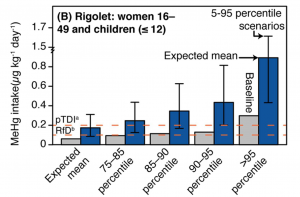 Measured baseline and modeled future MeHg exposures relative to (a) the Health Canada provisional tolerable daily intake and (b) the US EPA reference dose for the mean and select percentiles among one study subpopulation. Adapted from Calder et al. (2016).

This work leverages advances in environmental chemistry to create probabilistic risk forecasting tools for complex aquatic environments that can be used to screen potential impacts on human MeHg exposures.We developed a model to describe the impacts of MeHg released from an upstream reservoir on the food web in a downstream estuarine fjord as a function of local conditions and reservoir characteristics.

We developed this analysis around the case of the Labrador Inuit, settled downstream from the Muskrat Falls hydroelectric generation facility. 1,145 Inuit participated in a dietary survey and exposure assessment to calculate the potential exposure impacts of upstream hydroelectric development. The Inuit community offered research assistants to carry out the work and guided the development of the study protocol. 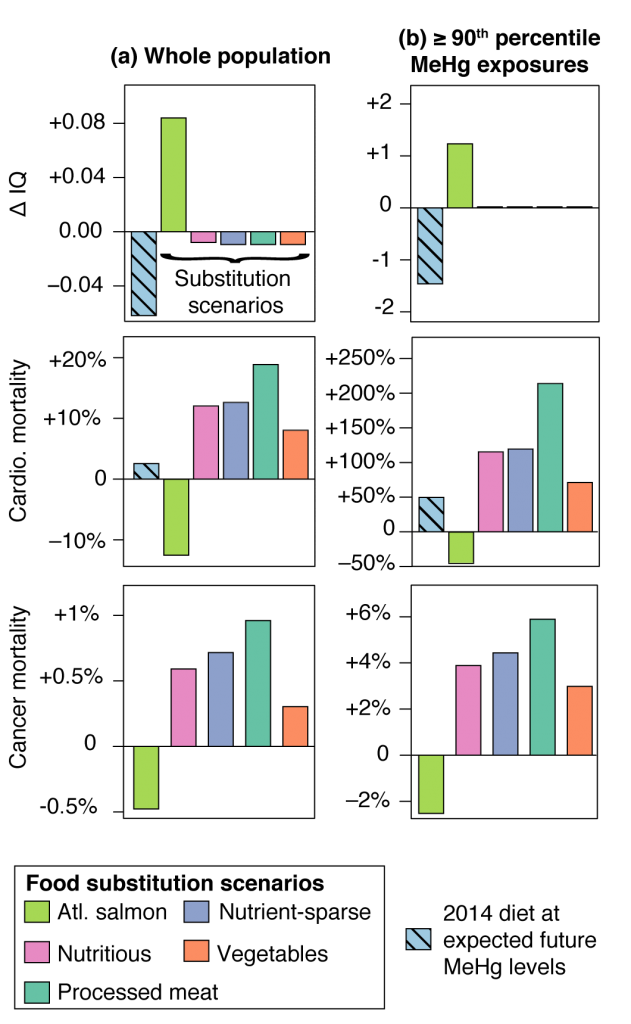 Neurodevelopmental, cardiovascular and cancer risks for increased MeHg exposures from local food vs. five hypothetical dietary decisions (four of which represent transitions away from traditional local foods and the fifth is increased consumption of local salmon).

It has long been acknowledged that traditional foods are disproportionate sources of both nutrients and contaminants among indigenous populations. However, a lack of quantitative understanding of the risks and benefits of traditional foods, in comparison with alternatives, have meant that food advisories have typically been confusing and contradictory.

We created a database of nutrient profiles in all foods in the Inuit diet (traditional, local foods and store-bought foods) and compiled confounder-adjusted dose-response relationships for foods, nutrients, and MeHg based on latest epidemiological studies. We combined these to evaluate the net health impacts of 1) increased exposures to MeHg at present-day diet compared to 2) several hypothetical dietary changes that people may make in response to food advisories or fears over the quality of local foods (for example, replacement of local foods with store-bought alternatives).

Calder, RSD (2019). “Muskrat Falls hydroelectric project poses risks for Canada that are being ignored”, The Conversation. [Read] Republished as:

This work was carried out in the Biogeochemistry of Global Contaminants lab at the Harvard John A. Paulson School of Engineering, directed by Prof. Elsie Sunderland. The Nunatsiavut Government actively facilitated our health study. We also acknowledge funding received through NIH, NSERC, NSF, and ArcticNet.