The Alhambra, with its calm amplitude, hypnotising proportions, mysterious calligraphy, and sweet-smelling gardens, stood true to its description as a “pearl set in emeralds.” Built around a theme of paradise on earth, the Alhambra and our Spanish expedition was an eye-opening experience. When one spoke of Islamic architectural wonders, what used to come to my mind was the architectural magnificence of the subcontinent – the Taj Mahal, Humayun’s Tomb, the Red Fort, and the Shalimar Gardens – of Mughal times. I was oblivious to the existence of Muslim architectural feats such as the Alhambra and the Great Mosque of Cordoba in the West. My oblivion in this regard may be a result of my ties with the subcontinent, but I also think that the way most of the Muslim architecture in Spain changed hands may have also impacted its popularity as “Muslim” architecture. For example, both the Grand Mosque of Cordoba and the Alhambra were subjected to Christian revisions with the onset of the Reconquista and the expulsion of the Muslims. The Alhambra, however, presents a unique opportunity to compare both Muslim and Western architectural styles as the Nasrid Palace is juxtaposed with the Renaissance palace of Charles V. In this blog post, I will discuss some of the most prominent elements of Muslim architecture, such as the calligraphy on the walls, the ornate ceilings, and the mosaics and colored tiles in context of the Alhambra.

Walking into the Alhambra, I was fascinated by the intricate detail of the walls and pillars, which symbolises centuries of Muslim rule in al-Andalus. The walls and the pillars of the Alhambra are adorned by Arabic calligraphy from floor to ceiling, which made me feel like I was walking into a story book. As I walked through the fort, I wondered what the inscriptions meant. Researchers have successfully decoded, dated, and identified 3,116 of the 10,000 inscription in the Alhambra. Some of the inscriptions are verses of poetry by Islamic poets like Ibn al-Khatib and Ibn Zamrak, while others are verses from the Quran. One inscription that is prominent throughout the Alhambra – on walls, arches, and columns – is “There is no victor but Allah”. Individual words like “happiness” or “blessing” recur throughout the palace, which some claim to be divine expression that were supposed to protect the monarch. Other prominent inscriptions include, “Rejoice in good fortune because Allah helps you” and “Be sparse in words and you will go in peace.” The inscriptions from the Quran are intentionally situated far from the ground and towards the top of the walls.The inscription in the throne room read: ¨From me you are welcomed morning and evening by the tongues of blessing, prosperity, happiness and friendship… has decorated me with the robes of his glory and excellence without disguise and has made me the Throne of his Empire: may its eminence be upheld by the master of divine glory and the celestial throne.¨ 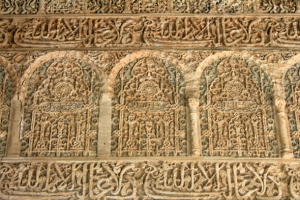 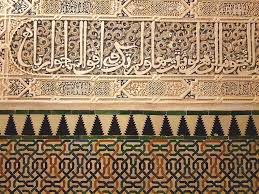 The ivory starry ceiling particularly stood out to me. As depicted in the photograph below, the intricate wood ceiling contains both eight pointed and sixteen pointed stars, which have exacting measurements. According to popular opinion, the 8018 multi-colored panels symbolise the seven heavens of Islamic paradise and the diagonal lines from the centre represent the four trees of life. It was interesting to think about how the light from the windows would have illuminated the throne, creating an effect of mysterious glory. Other ceilings in the Alhambra include scenes from court, and present a fascinating array of tempered glass and paintings. It was interesting to think about how these ornate structures were put into place without the availability of advanced machinery. 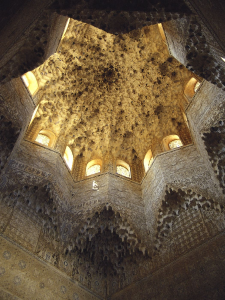 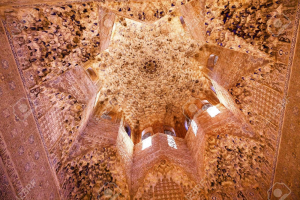 The mosaics and the colored tiles that I encountered in the palace were striking. Such mosaics and tiles are still used back home in Pakistan. In the Alhambra, they served a two-fold purpose of decoration and keeping the palace cool during the summer. The intricate design and the geometrical precision is awe-inspiring. Moreover, the colors themselves were not readily available and had to be made from cobalt (blue), manganese (purple), iron (red+green), lead (yellow). Plant motifs are vibrant throughout the palace from the arches to the ceilings and the floors, which is in line with Islamic disapproval of the depiction of human images. 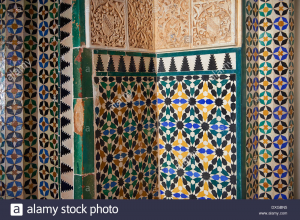 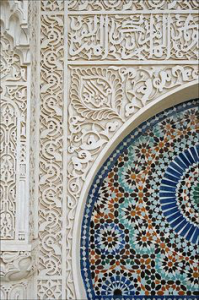 Water fountains form an essential component of Islamic architecture, but the Fountain of the Lions in the Alhambra particularly stood out to me for its symbolism of strength, power, and sovereignty. A poem written by Ibn Zamrak adorns the edge of the fountain, which not only praises the beauty of the fountain but also provides insight into the workings of their complex hydraulic systems. The twelve smiling lions, each of which is slightly unique, are made out of white marble and underneath the base of the fountain are four water channels, which are said to represent the four rivers of paradise. All of the twelve lions also sprout water from their mouths, which creates a soothing vibrating sound as one stands in the center of the palace. 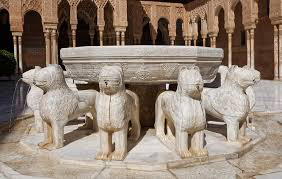 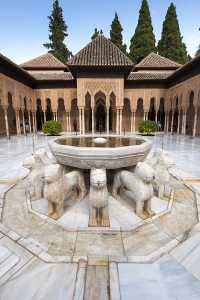 The Alhambra, as we saw it, was devoid of the rich silks, the rugs, the vases, musical instruments, and the intricate wood furniture that may have lined the palace during Muslim rule. One can only imagine what it may have looked like at its prime.

This trip to Spain was revelatory and provided me with a significant block of missing information about Muslim rule in the West. Walking through the gardens, the palaces, and the cathedrals, all that came to mind was the several prominent historical figures that had walked the same path – often in their chariots, on horseback, and on elephants – as I was. A personally exciting moment was when I saw the reflection of the Patio de los Arrayanes (Court of Myrtles) in the water in front of it, seeing what I had so far only seen in photos and dismissed as a product of photoshop. The following quote from ‘Perks of Being a Wallflower’ effectively describes up how I felt,  “And in that moment, I swear we were infinite.” 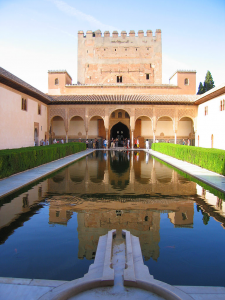 (A huge thank you to the Estee Lauder Foundation for making this trip a possibility.)

This entry was posted on Monday, April 1st, 2019 at 3:54 am and is filed under Uncategorized. You can follow any responses to this entry through the RSS 2.0 feed. You can leave a response, or trackback from your own site. 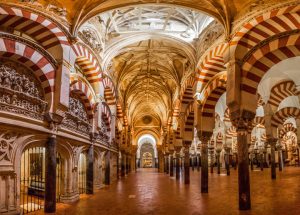