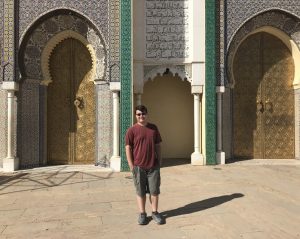 Fes and Rabat are two of the most important cities in Morocco, with Fes being the religious capital of the country and Rabat being the political capital. From the time I’ve spent living in each city, there have been many differences I’ve noticed.

In Fes, the medina and the modern city are completely separated, often requiring you to get a petit taxi to get from one side to another. The taxi industry in Fes is fair unregulated, with many taxi drivers refusing to turn their meters on and often charging about double the actual price. The streets of the Fes medina are very narrow and it’s nearly impossible to go anywhere there without being harassed by peddlers and scam artists trying to turn a quick dirham off of me. There was one guy I had to pass every day to get to class who kept trying to sell me “Aladdin lamps” for “50% off”, which didn’t sound too bad until I realized the half-off price for a tiny metal lamp was 370 dirhams.

In Rabat, the medina is part of the city, and the roads are much less crowded in most areas. Not only that, but not once in Rabat was I harassed or swindled by any trinket-selling scam artists or crooked taxi drivers. Because of this, I felt safer in Rabat, and would often leave the house for fresh air and to buy water. And what really separates Rabat from other Moroccan cities is that it isn’t always above 80 degrees every day, meanwhile in Fes the temperature would regularly surpass 95 degrees.