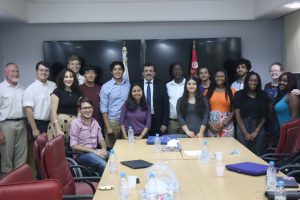 During our stay in Tunis, at the end of one of our meetings before our coffee break, we were told that President Beji Caid Essebsi had fallen ill and been admitted to a hospital. After our fifteen minute coffee break had ended, we were informed, rather nonchalantly, that the President had died. My classmates and I were shocked at this news, but what was the most worrying about it is that we had just been learning about how new of a democracy Tunisia was. My first thoughts were about how the panic of the President’s death could open a window for corrupt elements to take power in the Tunisian government. My mom is in my state’s house of representatives, and if there’s one thing I’ve learned about politics from her, it is that times of crisis bring about the greatest political changes, for better or for worse. What made this even more terrifying was learning about the role the Tunisian military played in the ousting of President Ben Ali during the Tunisian Spring. I began to fear that we would witness a military coup take place in the country while we were still in it. Luckily, that never came to pass, but the death of the President was, undoubtedly, a shock to us all.