The Holley lab is interested in studying the role of non-coding RNAs in cardiovascular health, with a particular focus on box C/D small nucleolar RNAs (snoRNAs). Box C/D snoRNAs typically guide a chemical modification, 2’-O’methylation, of ribosomal RNAs by recruiting the methyltransferase fibrillarin (FBL), but our lab has shown that snoRNAs are capable of guiding such modifications on mRNAs as well. Identifying new mRNA targets of snoRNA-guided methylation is relevant because these can reveal new proteins and genes that can be methylated, leading to potential changes in gene expression and/or protein translation. These molecular changes may have a significant impact at the physiological level, affecting the pathogenesis of cardiovascular diseases like hypertension and heart failure.

The first project I worked on was investigating the 2’O-methylation (Nm) on the protein coding region of the Peroxidasin (PXDN) protein by two box C/D snoRNAs. We were able to show that the Nm modification increases Pxdn mRNA expression but inhibits protein translation, regulating PXDN activity both in vitro and in vivo. Thus, snoRNA-guided Nm modifications of mRNA have the ability to influence physiologic gene expression through regulation of mRNA expression and protein translation. 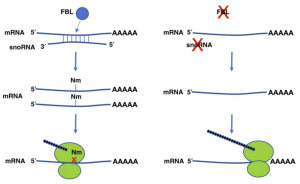 The current project I am working on is discovering new mRNA targets of snoRNA-guided methylation. While crosslinking, ligation, and sequencing of hybrids (CLASH) has been previously used to discover snoRNA-rRNA interactions, it has not been utilized to explore new mRNA targets. The discovery of such mRNA targets hopes to unveil modifications that can influence snoRNA expression, which has previously been shown to affect the pathogenesis of cardiovascular disease. Medicines can then be engineered to control modifications on such mRNA targets to allow for effective prognosis and therapeutic intervention of cardiovascular disease.