A Conversation with Paul Miller 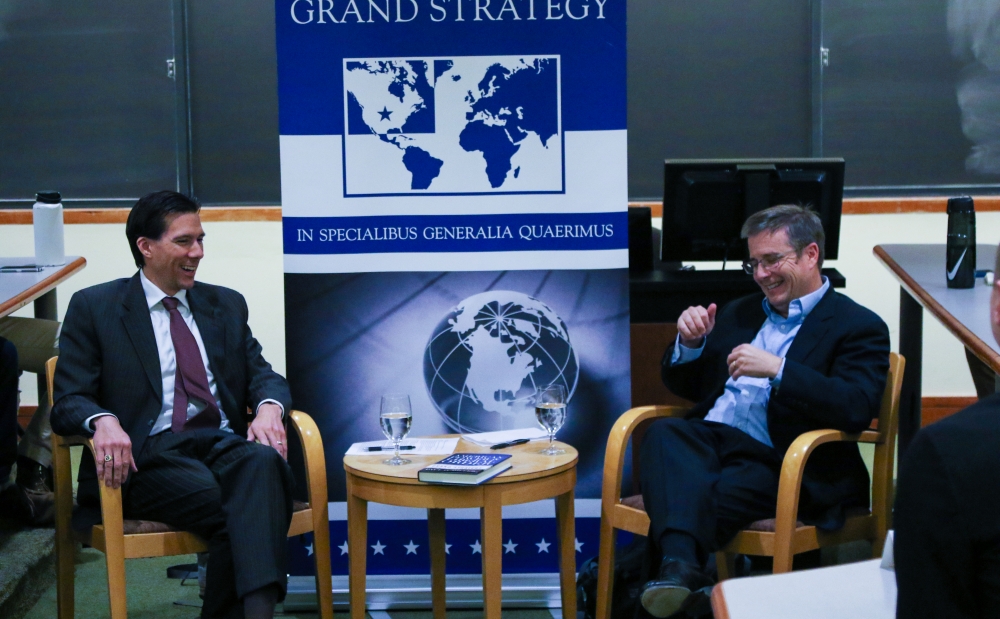 What do the foreign policies of President Donald Trump and former President Barack Obama have in common? If you believe Paul Miller, former Director for Afghanistan and Pakistan on the National Security Council, then the answer is quite a lot.

Miller addressed a packed room in the Sanford School of Public Policy about Trump’s nationalist foreign policy in a talk moderated by Peter Feaver, professor of political science. Among Miller’s claims was the argument that Trump’s “America First” strategy is an extension, not repudiation, of Obama’s prior approach—a striking contrast to Colin Kahl’s remarks last Thursday to the opposite effect.

“[Trump]’s probably just going to drop a ton of bombs, declare victory and go home, which is what Obama did in Libya,” Miller said, on the subject of Trump’s intention to eradicate radical militant terrorism in the Middle East.

Contrasting himself to Trump, Miller highlighted his prevailing faith in the value of a “liberal order” pursuant to theories of classical liberalism. Such theories advocate for economic and political freedom with limited government. In large part, Miller argued against policies that would disavow responsibilities to other countries, advocating instead for a greater U.S. role.

“I think it’s a real thing, it actually exists and it’s a good thing, and we should invest in it and upkeep it,” Miller said. “I do agree with America first. I just disagree with how to get there, and I think that liberal order is the best way to secure American interests.”

Miller argued for what he acknowledged was an unpopular position in defense of the U.S.’s intervention in Afghanistan. Although he conceded that the war in Afghanistan was unsuccessful, he attributed it to mistakes that were by no means “foreordained.”

“I was Director for Afghanistan under Bush and Obama so I think I can safely say it’s my fault,” he joked. “I still think the war in Afghanistan is important, just and winnable.”

Miller added that the price tag for the war in Afghanistan was a “rounding error” and “totally worth it, totally affordable” in exchange for denying terrorists a safe haven.  Nevertheless, Miller noted the necessity of tempering classical liberalism with realistic expectations of what the U.S. can actually achieve. In particular, he argued that the U.S. should be able to focus on pressing areas of geopolitical concern—such as Ukraine—while recognizing that unfortunately “there’s nothing we can do about [Syria] right now.”

Miller also discussed the American electorate’s decisive support for two candidates who opposed the Trans-Pacific Partnership and defended the merits of free trade. He took aim at anti-free trade policies suggested by Trump, including a proposed 20 percent import tax on Mexico.

“Do you like being able to upgrade your smartphones for cheap? This is a miracle device right here,” he said, gesturing at his smart phone. “If you want this made in America, it’s going to cost two or three times more.”

He also warned that other countries could follow America’s anti-trade lead, potentially triggering a worldwide spiral.

“It’s fine to tap the brakes on free trade now and then, but let’s recognize the cost,” Miller said. “Your real purchasing power will go down. That’s the price tag of our nationalist foreign policy.”

Miller also criticized China’s “unhealthy” attempts to assert itself as a global superpower through creating its own “parallel” international institutions, calling its brand of economic liberalization without political freedoms “self-defeating.”

Feaver observed that some of of Trump’s advisors—for example Secretary of Defense James Mattis or Secretary of State Rex Tillerson—could have views that fall within the scope of what Miller suggests. Miller responded that the National Security Council is “not horrible” and “will do the job,” but expressed concern with what he called Trump’s apparent tendency to preference the advice of inner circle members such as Chief Strategist Steve Bannon.

“What I worry about is that the liberal order has been eroded—and it will continue to erode certainly in the first part of the Trump administration. By the time we get to an inflection point, how hard is it going to be to rebuild and will it be possible to rebuild?” Miller asked. “I don’t know. Trump can do a lot of damage.”

View the original article in the Chronicle here.