How Everything Became War and the Military Became Everything

“How Everything Became War and the Military Became Everything”

A Conversation with Rosa Brooks 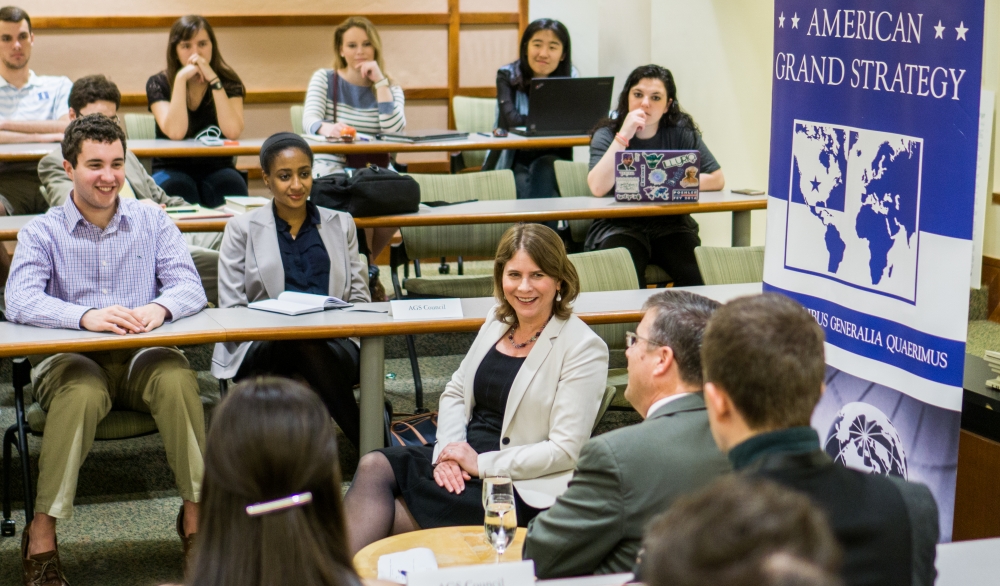 By Frances Beroset | Friday, February 24
During the event, Brooks and Peter Feaver, professor of political science, discussed her new book “How Everything Became War and the Military Became Everything” as well as her work in the Defense Department under President Barack Obama. Brooks made headlines earlier this month for speculating in a blog post for Foreign Policy that a military coup is possible under Donald Trump’s presidency.

She explained that she has always considered a military coup or disobedience to presidential orders impossible in the United States, but that if there were “a truly insane order of the ‘nuke Mexico’ variety,” the scenarios might become plausible to her.

However, Brooks noted that all presidents, either Republican or Democrat, who enter office with a radical agenda soon discover their plans being slow-rolled by the bureaucracy. They must give up some of their ideas because of the difficulty of bringing them to fruition.

“I think in the case of President Trump, we’ve already seen a much greater and more overt push-back coming from some rather unlikely quarters—the intelligence community, the National Park Service—and the only reason I would add the asterisk to my argument that we can’t count on the military to disobey illegal orders because no president would be dumb enough to just say ‘I order you to commit a war crime,’” Brooks said. “Trump has shown a willingness to be unsubtle and to make enemies of everybody.”

Brooks’ latest book explores the change in boundaries between war and peace that took place after the September 11 attacks. She noted that the role of the military has became much more ambiguous since then.

“[Prior to the attacks,] nobody’s thinking about Afghanistan,” Brooks said. “And then this horrific thing comes out of a place that nobody is thinking of. ”

She explained that the attacks sent a message to the senior military leaders that the next terrorist attack could come from some other place that is little known.

“If this threat was box cutters and civilian planes, then the next threat could be anything, and it could come from anywhere,” she said. “And that means, if your job is to protect the United States, then you have to do everything everywhere.”

The role of the military expanded dramatically because of the United States’ growing goal of anticipating this next threat, Brooks added.

She pointed out that an impulse emerged for the U.S. to build partners, shape the battle space and gather linguistic and cultural knowledge in every place in the world that poses a potential threat.

“It’s impossible, obviously it’s impossible, the world’s too big,” she said. “But I think that’s the impulse. And the trouble with that impulse, of course, is that there’s no obvious limit.”

Since the boundaries between war and peace have blurred in the last 15 years, there is no longer a clear difference between when special laws for times of war apply and when they do not, Brooks explained.

“Once you say, ‘Aha! It was war and the law of war applies,’ then there’s not many limiting factors that the law will give us, since it’s kind of a binary framework of law,” Brooks said. “So suddenly you’re in a world where there are very few legal limits on what the executive branch can do.”

View the original article in the Chronicle here.