The central dogma of molecular biology postulates that DNA is transcribed into RNA, which is then used for translation of proteins. With the completion of the ENCODE project, however, it was discovered that a large portion of RNA serves important functions other than encoding for proteins. This includes tRNA, ribosomal RNA (rRNA), and non-coding RNA (ncRNA). 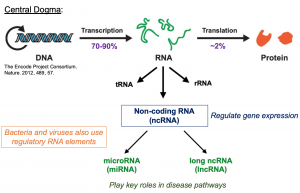 Further research into the role of ncRNA has revealed that these biomolecules play key roles in disease pathways. Thus, there is interest in targeting ncRNA as an alternative therapeutic route to targeting proteins or enzymes.

How do you target RNA with small molecules?

There are several challenges in targeting RNA with small molecules that do not exist when targeting proteins. For instance, RNA has dynamic structure and has limited chemical diversity (i.e. it is comprised of four nucleotides, rather than 20 canonical amino acids like proteins). Thus, there is difficulty in designing or identifying small molecules that can target one RNA selectively amongst all other ncRNA, tRNA, and rRNA.

Despite this, there has been exciting progress toward identification of small molecules that bind RNA selectively. Research in the Hargrove lab has contributed to progress in this field by addressing three key questions:

Through this CURE course, first-year students will address these questions and contribute to our understanding of small molecule binding to RNA through hands-on, hypothesis-driven laboratory experiments.